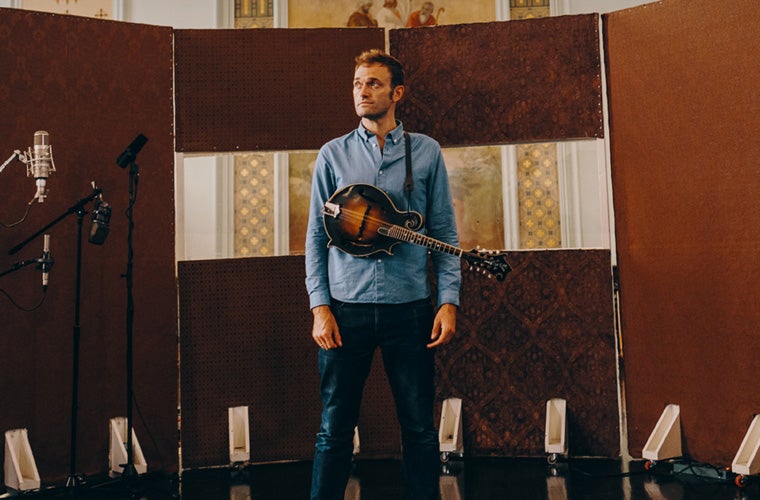 MacArthur Fellow and Grammy Award-winning mandolinist, singer, songwriter Chris Thile, who the Guardian calls "that rare being: an all-round musician who can settle into any style, from bluegrass to classical,” and NPR calls a "genre-defying musical genius," is a founding member of the critically acclaimed bands Punch Brothers and Nickel Creek. For four years, Thile hosted public radio favorite Live from Here with Chris Thile (formerly known as A Prairie Home Companion). With his broad outlook, Thile creates a distinctly American canon and a new musical aesthetic for performers and audiences alike, giving the listener “one joyous arc, with the linear melody and vertical harmony blurring into a single web of gossamer beauty” (New York Times).

Most recently, Chris recorded Laysongs, released June 4, 2021 on Nonesuch. The album is his first truly solo album: just Thile, his voice, and his mandolin, on new recordings of six original songs and three covers, all of which contextualize and banter with his ideas about spirituality. Recorded in a converted upstate New York church during the pandemic, Laysongs’ centerpiece is the three-part “Salt (in the Wounds) of the Earth,” which was inspired by C.S. Lewis’s The Screwtape Letters. The album also features a song Thile wrote about Dionysus; a performance of the fourth movement of Béla Bartók’s Sonata for Solo Violin; “God Is Alive, Magic Is Afoot” based on Buffy Sainte-Marie’s adaptation of a Leonard Cohen poem; a cover of bluegrass legend Hazel Dickens’ “Won’t You Come and Sing for Me,” and “Ecclesiastes 2:24," original instrumental loosely modeled after the Prelude from J.S. Bach’s Partita for Solo Violin in E Major.