HomeAbout the ASOAboutAtlanta School of Composers

The Atlanta School of Composers evolved from a continuing commitment by Robert Spano and the Orchestra to nurture, commission and record contemporary music through multi-year partnerships with a new generation of American composers, including Jennifer Higdon, Christopher Theofanidis, Osvaldo Golijov, Michael Gandolfi, and Adam Schoenberg with other prospective composers on the horizon.

Since his tenure with the Atlanta Symphony Orchestra in 2001, Maestro Spano and the ASO have performed nearly 100 contemporary works (composed since 1950), including seven ASO-commissioned world premieres, two additional world premieres and one U.S. premiere.

Five of Mr. Spano’s recordings with the Atlanta Symphony Orchestra have won a total of eight Grammy® Awards, including Jennifer Higdon’s City Scape, Golijov’s Ainadamar, and a disc that features Christopher Theofanidis’ The Here and Now. In 2007, Telarc released the world premiere recording of Michael Gandolfi’s Garden of Cosmic Speculation, featuring Robert Spano and the ASO. 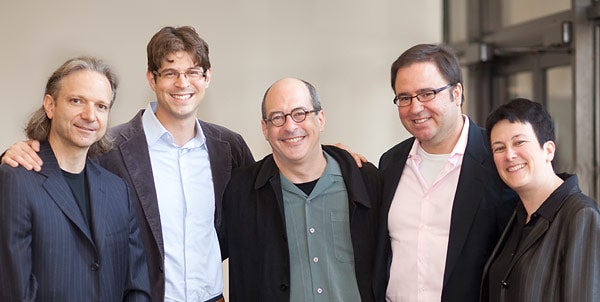 In 2007, the ASO was selected by the American Society of Composers, Authors and Publishers (ASCAP) to receive its highest award, the John S. Edwards Award for Strongest Commitment to New American Music— the sixth ASCAP award in the ASO’s history and second under Robert Spano. The annual award is given by ASCAP and the League of American Orchestras to honor programming that stimulates audiences, builds repertoire, and strengthens support for American composers in this country and abroad. The awards recognize orchestras whose programming in the most recent season demonstrates a strong commitment to contemporary music.

The ASO continues to be a trendsetter at the forefront of American orchestras supporting, performing and recording the composers and music of our time.

The Atlanta School of Composers was one of three Atlanta Symphony Orchestra initiatives awarded a $1 million three-year grant by The Andrew W. Mellon Foundation (NY). This grant also supports Recordings and Theater of a Concert. Awarded in recognition of innovative artistic achievement and as an investment in the Orchestra’s ambitious artistic initiatives, this unprecedented level of support is the first Mellon Foundation grant to the ASO in more than 30 years, as well as the largest grant from a national foundation outside Atlanta earned by the ASO in its history. Visit The Andrew W. Mellon Foundation

Turner Voices is Turner Broadcasting’s philanthropic initiative that focuses on building the next generation of storytellers in the arts and high school education arenas.