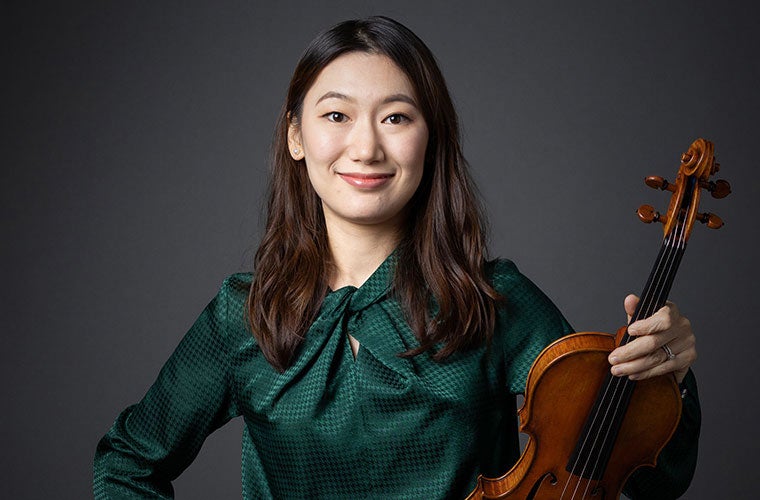 Violinist Dae Hee Ahn joined the Atlanta Symphony Orchestra in May of 2020. She is a multi-talented musician who has appeared on stages across the United States and South Korea as a soloist, chamber musician, and orchestral player. Before joining the Atlanta Symphony, she was a member of the New Haven Symphony and has served as a rotating concertmaster of the Yale Philharmonic under the baton of Maestros Peter Oundjian, Carolyn Kuan, and Shinik Hahm.

Starting with her first solo appearance with the Academic Youth Symphony at the age of 7, Ahn has performed with the New Jersey Philharmonic, Livingston Symphony, and the High Mountain Symphony. She is the winner of the Oneppo Chamber Music Competition, Livingston Symphony Young Artist Competition, and the Mae and Fletcher Fish Young Artist Competition, and was named an alternate winner at the Yale School of Music Woolsey Concerto Competition. Throughout her career, she was featured at the Kennedy Center, Lincoln Center, Alice Tully Hall, Carnegie Hall, CMS’s Rose Theater, and Yonsei Kumho Arts Center. As an ardent chamber musician, Ahn has collaborated with esteemed artists Ani and Ida Kavafian, Steven Tenenbom, Robert McDonald, and Vivian Weilerstein at Four Seasons Winter Workshop and Perlman Chamber Workshop. She also performed for members of the Emerson String Quartet, Tetzlaff Trio, and the Dover String Quartet.

A DMA candidate at the Yale University School of Music under Ani Kavafian, Ahn is a passionate instructor who was twice invited as a guest lecturer at Rutgers University and who frequently taught and coached chamber groups at the Bergen County Academies. She was a Music and Initiative teaching artist at Yale, where she worked with music programs of elementary schools in the greater New Haven area.

Together with her pianist sister, Dae Hyung Ahn, Ahn performs as the violinist of Duo Elim - a group that performs not only repertories in the classical canon but also their own transcriptions of hymns. With Sony Music Korea, Duo Elim released a CD of self-transcribed hymns in 2016 and recently released their second album in 2019.

A former student of Catherine Cho and Sylvia Rosenberg, Ahn has a bachelor’s degree from The Juilliard School and a master’s degree from Yale University’s School of Music. Named an ambassador of the Doublestop Foundation in 2018, Ahn performs on a Terry Borman violin, a loan made possible with the generosity of Cho Liang Lin.

What's the most interesting or difficult facet of your instrument?
I think learning to hold the violin and the bow is one of the most difficult facets to learn. Having the right set-up is so crucial to progress and physical health, but it also seems to be somewhat personal. At the end of the day, not everyone is going to feel comfortable holding the instrument and the bow the exact same way. Understanding the principles of holding while also being sensitive to your body seems to be the key to figuring out the best solution.

Any famous people in your family?
Somewhere along my mother’s side of the ancestry line, I was told that there was a king (the wang dynasty)

Do you come from a musical family?
Yes, I have an older sister who is a pianist and with who I often play chamber music with. We also founded a group together - Elim Duo - and together we perform our own transcriptions of hymns.

Earliest musical hero?
Itzhak Perlman and Gil Shaham - I grew up listening to their performances and loved how they expressed music.

What other instrument do you wish you played?
Oboe and the english horn!! Because I absolutely love the sound of the instruments.