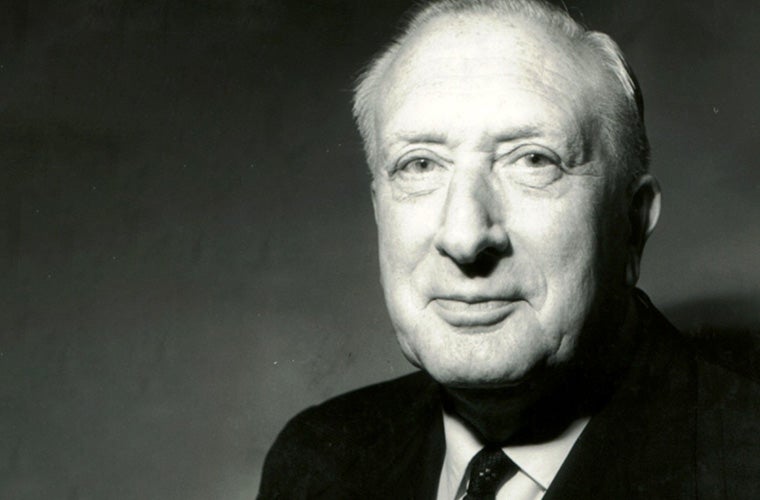 Sir William Walton was born in Oldham, Lancashire in 1902, the son of a choirmaster and a singing-teacher. He became a chorister at Christ Church Cathedral, Oxford, and then an undergraduate at the University. However, he had little formal compositional tuition at this or any other time, and though he later received advice from Ernest Ansermet and Eugene Goossens in conducting, he may be considered essentially self-taught.

His first composition to attract attention was a piano quartet written at the age of sixteen. Two early 'avant-garde' pieces have recently been rehabilitated to great acclaim: the 1922 String Quartet and 1923 Toccata for Violin and Piano.

At Oxford he made the acquaintance of the Sitwells who gave him friendship, moral and financial support and in 1922 he collaborated with Edith in devising the entertainment Façade. Less than ten years later, Osbert prepared the text of another masterwork, Belshazzar's Feast.

From 1922 to 1927 Walton began to spend an increasing amount of time abroad, notably in Switzerland and Italy. These were the years of the Viola Concerto, Belshazzar's Feast, and the First Symphony.

In 1938 Jascha Heifetz asked him for a violin concerto and this was first performed by Heifetz in December 1939. In 1941 he wrote the overture Scapino for the 50th anniversary of the Chicago Symphony Orchestra.

The war years were devoted mainly to writing film and ballet scores. Films included the memorable First of the Few from which Walton extracted the 'Spitfire' Prelude and Fugue, and the ballets were The Wise Virgins (1940) and The Quest (1943), both for the Sadler's Wells Ballet. In 1944 came the music for the first of Laurence Olivier’s major Shakespearean films, Henry V. Hamlet followed in 1948 and Richard III in 1955. These established Walton among the greatest composers for the screen.

Walton’s main output had resumed in 1947 with the appearance of a fine String Quartet and he completed his trilogy of string concertos in 1956 with the masterly Cello Concerto which he wrote for Piatigorsky. 1960 heard the first performance of Symphony No.2 and 1969 saw The Bear, a one-act 'extravaganza' to a Chekhov-based libretto by Paul Dehn, both of which continue to be performed throughout Europe.

In 1977 there appeared eight extensively re-worked and previously unpublished numbers of Façade under the title of Façade 2. Walton's last 'original' work of note was the Prologo e Fantasia written for Rostropovich in 1981-2.

In 1978 he was elected an honorary member of the American Academy and Institute of Arts and Letters. He was knighted in 1951 and in 1968 received the Order of Merit. He died in Ischia in 1983 at the age of 80.