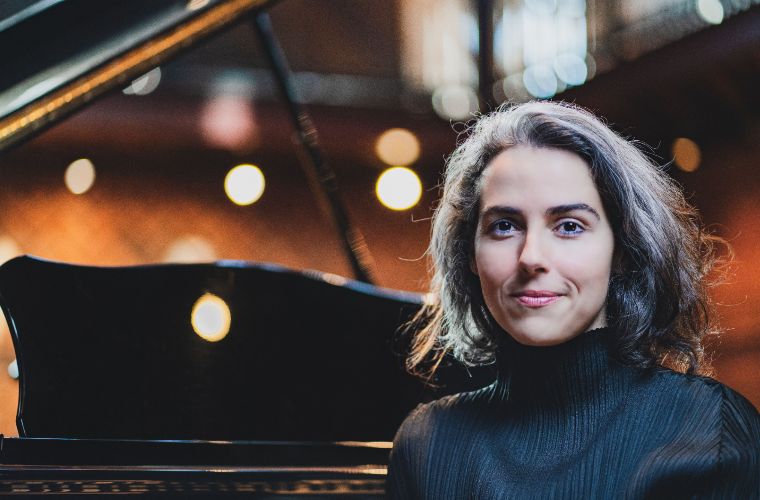 A powerful communicator renowned for her musical scope and versatility, Brazilian American Clarice Assad is a significant artistic voice in the classical, world music, pop, and jazz genres. A Grammy-nominated composer celebrated pianist, inventive vocalist, and educator, she is renowned for her evocative colors, rich textures, and diverse stylistic range. As an innovator, her award-winning education program, Voxploration, has been presented throughout the United States, Brazil, Europe, and Qatar. With her talent sought-after by artists and organizations worldwide, the multi-talented musician continues to attract new audiences both onstage and off.

Assad's music has been performed by internationally acclaimed orchestras, including the Philadelphia Orchestra, Tokyo Symphony, Queensland Symphony, and the Orquestra Sinfônica de São Paulo. Ms. Assad has served as a composer-in-residence for the Albany Symphony, the Cabrillo Festival of Contemporary Music, New Century Chamber Orchestra, and the Boston Landmarks Orchestra. Her works are published in France (Editions Lemoine), Germany (Trekel), Criadores do Brasil (Brazil) and by Virtual Artists Collective Publishing, (VACP) a publishing company co-founded with poet and philosopher Steve Schroeder. Ms. Assad is currently writing the soundtrack to Devoti Tutti, a documentary by Bernadette Wegenstein, while composing the music for a ballet by award-winning choreographer Shannon Alvis.

A popular recording artist, Ms. Assad has released seven solo albums and appeared on or had her works performed on another 30. Her music is represented on Cedille Records, SONY Masterworks, Nonesuch, Adventure Music, Edge, Telarc, NSS Music, GHA, and CHANDOS.

A passionate educator, in 2015 Ms. Assad founded VOXploration, an award-winning, trailblazing program which presents a creative, fun, and accessible approach to music education through meaningful, interactive experiences. In an era where digital interaction is part of the daily routine, participants utilize their bodies and voices as musical instruments in spontaneous music creation, songwriting, and improvisation in a class which combines music, theater, technology, and countless other creative approaches tailored to enhance human interactivity. Carefully curated to work equally well with participants of any age who have little music education or those having musical backgrounds, VOXploration has received grants and awards from Brazilian foundations such as CAIXA CULTURAL and SESC, as well as American grants from New Music USA and the McKnight Foundation. Ms. Assad has given masterclasses, residencies, and workshops throughout the United States, Europe, and Middle East, including at the Julliard School of Music, the Aarhus Conservatory of Music, Columbia College of Chicago, the University of Michigan, Pratt University, the University of Texas and the Royal Conservatory of Brussels.

Born in Rio de Janiero, Clarice Assad has lived in Brazil, France, and the United States. She is fluent in Portuguese, French, and English, and sings in all three languages, as well as Spanish and Italian. One of the most widely performed Brazilian concert music composers of her generation, she is the recipient of numerous honors and awards, including an Aaron Copland Award, several ASCAP awards in composition, a Morton Gould Young Composer Award, the Van Lier Fellowship, the Franklin Honor Society Award, the Samuel Ostrowsky Humanities Award, the New Music Alive Partnership program by the League of American Orchestras, and a McKnight Visiting Composer Award. Clarice Assad holds a Bachelor of Music degree from the Roosevelt University in Chicago, Illinois, and a Master of Music degree from The University of Michigan School of Music, where she studied with Michael Daugherty, Susan Botti, and Evan Chambers.