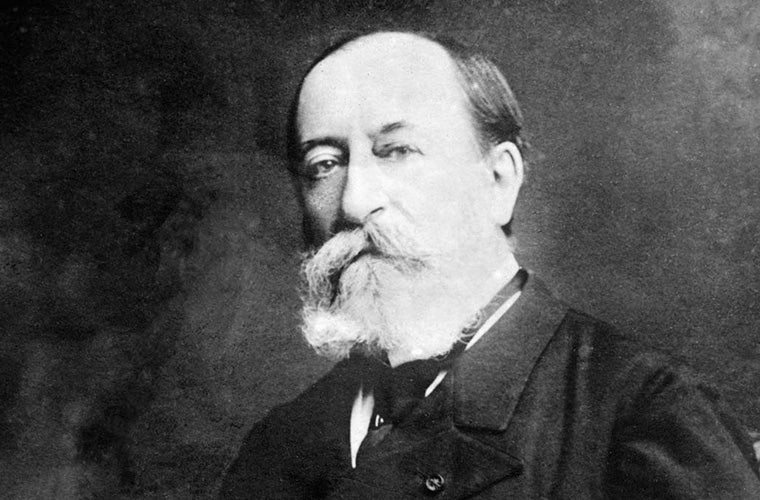 Camille Saint-Saëns (born October 9, 1835, Paris, France — died December 16, 1921, Algiers [Algeria]), was a composer chiefly remembered for his symphonic poems — the first of that genre to be written by a Frenchman — and for his opera Samson et Dalila. Saint-Saëns was notable for his pioneering efforts on behalf of French music, and he was a gifted pianist and organist as well as a writer of criticism, poetry, essays, and plays. Of his concerti and symphonies, in which he adapted the virtuosity of Franz Liszt's style to French traditions of harmony and form, his Symphony No. 3 (Organ) is most often performed.

A child prodigy on the piano, Saint-Saëns gave his first recital in 1846. He studied organ and composition at the Paris Conservatory, and in 1855 his Symphony No. 1 was performed. He became organist at the famed Church of the Madeleine in Paris in 1857, an association that lasted for 20 years. Liszt, whom he met about this time and with whom he formed an enduring friendship, described him as the finest organist in the world. From 1861 to 1865 he was professor of piano at the Niedermeyer School, where his pupils included Gabriel Fauré and André Messager.

In 1871 after the Franco-Prussian War, he helped found the National Society of Music, which promoted performances of the most significant French orchestral works of the succeeding generation. In the same year, he produced his first symphonic poem, Le Rouet d'Omphale (Omphale's Spinning Wheel) , which, with Danse macabre, is the most frequently performed of his four such works. His opera Samson et Dalila, rejected in Paris because of the prejudice against portraying biblical characters on the stage, was given in German at Weimar in 1877, on the recommendation of Liszt. It was finally staged in Paris in 1890 at the Théâtre Eden and later became his most popular opera.

In 1878 Saint-Saëns lost both of his sons, and three years later he separated from his wife. Over the following years, he undertook extensive tours throughout Europe, the United States, South America, the Middle East, and East Asia, performing his five piano concerti and other keyboard works and conducting his symphonic compositions. As a pianist, he was admired by Richard Wagner for his brilliant technique and was the subject of a study by Marcel Proust. From roughly 1880 until the end of his life, his immense production covered all fields of dramatic and instrumental music. His Symphony No. 3 (1886), dedicated to the memory of Liszt, made skilled use of the organ and two pianos. In the same year, he wrote Le Carnaval des animaux (The Carnival of Animals) for small orchestra, a humorous fantasy not performed during his lifetime that has since won considerable popularity as a work for young people's concerts. Among the best of his later works are the Piano Concerto No. 5 (1895) and the Cello Concerto No. 2 (1902).

Though he lived through the period of Wagner's influence, Saint-Saëns remained unaffected by it and adhered to the classical models, upholding a conservative ideal of French music that emphasized polished craftsmanship and a sense of form. In his essays and memoirs, he described the contemporary musical scene in a shrewd and often ironic manner.