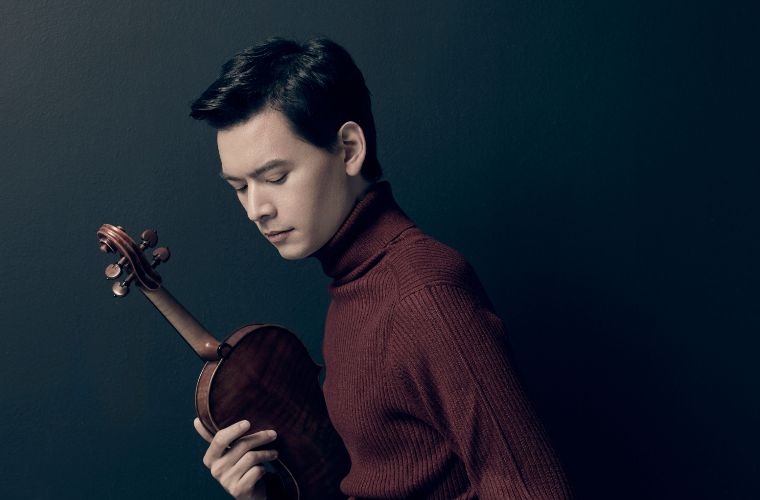 Home About the ASO Stefan Jackiw

Stefan Jackiw is one of America’s foremost violinists, captivating audiences with playing that combines poetry and purity with an impeccable technique. Hailed for playing of “uncommon musical substance” that is “striking for its intelligence and sensitivity” (Boston Globe), Jackiw has appeared as a soloist with the Boston, Chicago, Cleveland, New York, Philadelphia, and San Francisco symphony orchestras, among others.

His 2020-21 season includes streamed performances with the Orchestra of St. Luke’s and the Bridgehampton Chamber Music Festival, virtual recitals alongside pianist Conrad Tao and cellist Jay Campbell as part of the Junction Trio, and performing the complete Ives Sonatas with pianist Jeremy Denk, with whom he has recorded the sonatas for future release on Nonesuch Records. In July 2020, he launched Stefan’s Sessions, a virtual masterclass series exploring major works with up-and-coming young violinists, which continues throughout the season. In spring 2021, he performs live with the Fort Worth Symphony, Sinfónica de Tenerife in Spain, and KBS Symphony in South Korea. The season was to have also included concerts with the Antwerp Philharmonic, Royal Scottish National Orchestra, Oslo Philharmonic, Vancouver Symphony, Residentie Orkest, Colorado Symphony, Rochester Philharmonic, and Florida Orchestra.

In 2019-20, Stefan appeared with the San Diego Symphony, Baltimore Symphony, Victoria Symphony, Portland Symphony, Boston Philharmonic, and Jacksonville Symphony. He also returned performing Stravinsky to the Bournemouth Symphony, the Helsinki Philharmonic, and the RTÉ National Symphony in Dublin with Leonard Slatkin. In recital, he continued touring the Ives Sonatas with Jeremy Denk, and appeared on tour with harpsichordist Mahan Esfahani, featuring a new commission by Paulina Zalubska. He also toured as part of the Junction Trio, with stops in Massachusetts, California, Texas, and Florida, among others. The rest of the season was to have included debuts with the LA Phil and Berlin Konzerthaus Orchestra, performances with the Philadelphia Orchestra at Bravo! Vail, and the Indianapolis Symphony, but instead continued with a wide variety of virtual recital programming, including a featured broadcast at the Mostly Mozart Festival, where the Junction Trio had been scheduled to perform live.

Highlights of recent seasons include his debut with the Cleveland Orchestra and Juraj Valcuha, with whom he also reunited for performances in Dallas, Detroit, and Luxembourg; performances of Prokofiev's Second Violin Concerto at Carnegie Hall with Mikhail Pletnev, as part of a multi-city tour with the Russian National Orchestra; as well as performances with the St. Louis Symphony under Nicholas McGegan, the Minnesota Orchestra under Ilyich Rivas, the Rotterdam Philharmonic under Yannick Nézet-Séguin, the Indianapolis Symphony under Krzysztof Urbanski, and the Pittsburgh Symphony under Valčuha. Other highlights in Europe included his performances with the Netherlands Radio Symphony and Ludovic Morlot at the Concertgebouw. In Asia, Stefan has appeared with the Tokyo Symphony at Suntory Hall under the direction of Krzysztof Urbanski, and the Seoul Philharmonic under Venzago. He has also toured Korea, playing chamber music with Gidon Kremer and Kremerata Baltica. In Australia, Stefan toured with the Australian Chamber Orchestra play-directing Mendelssohn. He also gave the world premiere of American composer David Fulmer’s Violin Concerto No. 2 “Jubilant Arcs”, written for him and commissioned by the Heidelberg Festival with the Deutsche Kammerphilharmonie under Matthias Pintscher. Recital highlights have included his performances of the complete Ives violin Sonatas with Jeremy Denk at Tanglewood and Boston’s Jordan Hall, and his performance of the complete Brahms violin sonatas, which he has recorded for Sony. He also recently recorded the Beethoven Triple with Inon Barnatan, Alisa Weilerstein, Alan Gilbert and Academy St. Martin in the Fields.

Born to physicist parents of Korean and German descent, Stefan Jackiw began playing the violin at the age of four. His teachers have included Zinaida Gilels, Michèle Auclair, and Donald Weilerstein. He holds a Bachelor of Arts from Harvard University, as well as an Artist Diploma from the New England Conservatory, and is the recipient of a prestigious Avery Fisher Career Grant. Jackiw plays a violin made in 1750 in Milan by G.B. Guadagnini, on generous loan from a private collection. He lives in New York City.