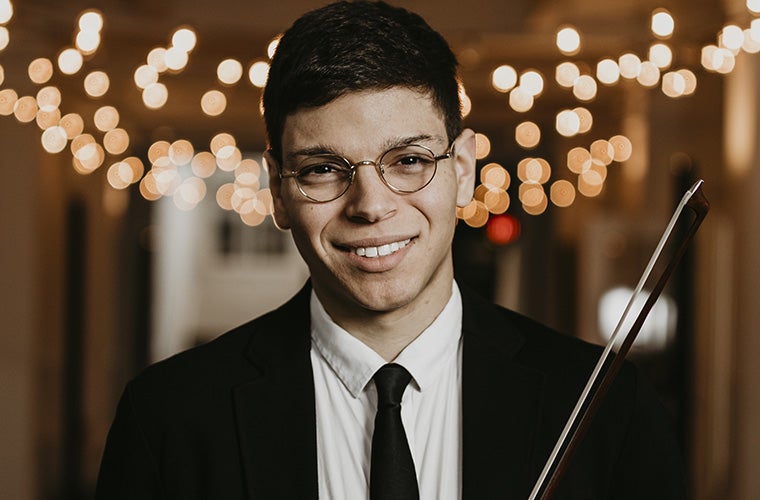 Home About the ASO Julian Maddox

Julian Maddox is a violinist from Minneapolis, Minnesota. He began studying the violin at the age of six, working extensively with Sally O'Reilly. Julian received his undergraduate degree at the Cleveland Institute of Music in 2019, and he is also pursuing his Master's degree at CIM as a student of Jaime Laredo and Jan Sloman. Julian has been a prizewinner in numerous competitions, including the Schubert Club, Thursday Musical, MNSOTA, Dakota Valley Symphony, and MTNA Competitions.

As an avid chamber musician, his ensembles have won first place in the MNSOTA Chamber Music Competition, and have worked with members of the Cleveland, Takacs, Emerson, Danish, Jupiter, and Cavani String Quartets. Currently, he is a contract member of the Canton Symphony Orchestra, and a substitute with the Akron Symphony, Cleveland Pops, Firelands Symphony, New World Symphony, and ProMusica Chamber Orchestras. Julian is also committed to engaging with his local community in Cleveland. He is a founding member of the CIM Black Student Union, and serves as a mentor for the CIM Musical Pathways Fellowship program. In 2018, he worked alongside Cleveland Orchestra members at the Cleveland School for the Arts in a special collaboration for the Cleveland Orchestra's "Prometheus Project" centennial celebration.

In addition to his musical endeavors, he is passionate about brewing coffee, and is a big basketball and football fan. Julian is currently based in Shaker Heights, OH, where he lives with his wife, Charrine, and their 20-month-old son, Theodore.