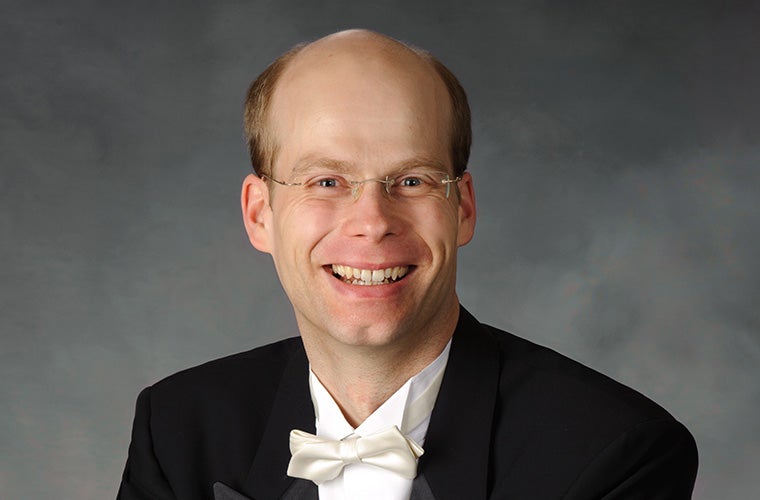 In the last two decades, German organist Dr. Jens Korndörfer has established himself internationally as performer, educator and church musician.

Praised as "a virtuoso in the grand Romantic tradition" who creates "performances that are deeply musically satisfying as well as exciting" (The American Organist), Jens is regularly invited at the most prestigious venues and festivals around the world. Highlights include solo concerts at Davies Symphony Hall in San Francisco, Merrill Auditorium in Portland (ME), Duke University Chapel, the Cathedral-Basilica in St. Louis, the Montreal Bach Festival, the Cathedrals in Washington, Berlin, Paris, Salzburg, Oslo, and Moscow, Westminster Abbey in London, the Royal Chapel in Versailles, the Minster in Ulm, Suntory Hall and Metropolitan Art Space in Tokyo, Kyoto Concert Hall, and the Cultural Centre in Hong Kong.

Jens' repertoire reaches from the Renaissance to the 21st century, including transcriptions, commissions and world premieres for organ solo, and organ with other instruments or choir. Widely recognized as a "prodigious technician" (La Presse, Montreal), his "effortless and poetic playing" (Susan Landale) "that is superior both technically and musically" (The American Organist), and his "well-planned, dramatic programming" (Nordbayerischer Kurier) delight both organ aficionados and first time visitors alike. In addition to frequently collaborating with other musicians, he has also performed with ensembles such as the Atlanta Symphony Orchestra, the Sapporo Symphony Orchestra, and the Filarmonica Arturo Toscanini.

The eclectic nature of his interests is also manifest in his four commercial recordings on major instruments in Canada, Japan, and the USA. The recordings (one of them with the solo trumpeter of the Sapporo Symphony Orchestra) and Jens' live performances have also been broadcast widely on dedicated radio channels such as Pipedreams, Organlive, and OrganRoxx.

Passionate about forming the next generation of organists, Jens taught first at Agnes Scott College (2014-19) and, since 2017, has been directing the successful rebuild of the organ program at Georgia State University. Designed to prepare students for a successful career in church and concert, the comprehensive program includes classes in improvisation, choral conducting, and harpsichord in addition to organ performance; graduate assistantships in partnership with major churches in the Atlanta area provide first-rate insights into the day-to-day business of a church musician.

Frequently invited as guest speaker and clinician, Jens has given master classes and presentations for chapters of the American Guild of Organists, at conventions, universities, and concert halls around the world. His research has been published in music journals such as The Diapason, La Tribune de l'Orgue, Musica Sacra, The Organ, and The American Organist, and he has served on the jury of competitions.

As Director of Worship and the Arts, and Organist at First Presbyterian Church of Atlanta, GA, Jens oversees a thriving music and arts ministry. Under his leadership, the sanctuary organ was not only renovated, but enlarged to 112 ranks in 10 divisions, equipped with a state-of-the art control system by Syndyne and completely re-voiced by organ builders Klais (Bonn, Germany) and Schlueter (Lithonia, GA). The church also just added a new Steinway Concert Grand Piano to its collection of instruments, and the concert series has expanded significantly in scope and attendance thanks to collaborations with major local cultural players (Atlanta Symphony Orchestra, HIGH Museum of Art, Atlanta Opera, Alliance Theatre).

Acutely aware of the arts' responsibility towards our society, Jens began a highly successful partnership with Challenge the Stats, an organization that raises awareness for minorities in the classical arts scene, and helped create scholarship opportunities for children from minorities in the church's School of Fine Arts. Through presentations and lecture series on inter-disciplinary topics in collaboration with FPC's resident theologian, and through creative events such as multi-media tours of the organ and lecture-recitals with organ arrangements of popular works, Jens further increased the reach of the church's music and arts ministry in the city of Atlanta and beyond.

Among Jens' many formative experiences, his tenure as organist in residence at the Concert Hall Kitara in Sapporo, Japan, in the 2005/06 season is of particular importance: In addition to a packed schedule with performances, recordings and teaching all over Japan, he was particularly inspired by the imaginative marketing and highly creative outreach efforts of the hall's administration, which resulted in frequently sold-out organ concerts (a rare occurrence in the Western World) and a very diverse audience that included all age groups. Ever since, in his positions Jens has striven to make the arts and especially the organ as successful as they were in Sapporo.