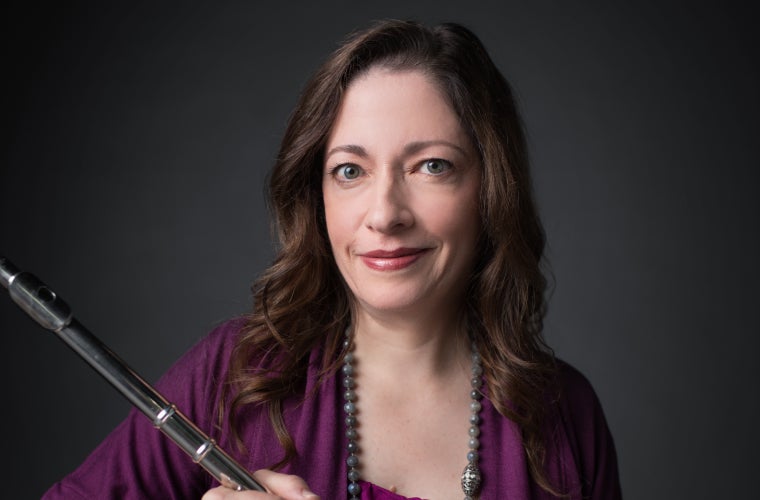 Christina Smith is one of the most sought-after flutists in the country as an orchestral player, soloist, chamber musician, and teacher. The 2015-16 season is Smith's twenty-fifth anniversary season as principal flutist of the Atlanta Symphony Orchestra, where she holds the Jill Hertz Principal Flute chair, endowed in perpetuity. Smith's flute solos can be heard on 37 ASO recordings. She has also appeared with the orchestra numerous times as a concerto soloist.

She graduated from Interlochen Arts Academy and began her studies at the Curtis Institute of Music as a pupil of the legendary Julius Baker. After just two years in Mr. Baker's studio, she won the principal flute chair in the ASO at age 20. Smith has also studied with Jeffrey Khaner, Tim Day, and has collaborated extensively with master teacher and clinician Keith Underwood.

Smith has recently appeared as guest principal flutist with orchestras such as the Chicago Symphony, Los Angeles Philharmonic, the Vancouver Symphony, the Baltimore Symphony, the St. Paul Chamber Orchestra, and the Pittsburgh Symphony. She earned critical acclaim while performing on the latter ensemble's 2010 European Tour.

Equally passionate about teaching, Smith serves on the faculty at Kennesaw State University and maintains a busy private studio. She remains highly in demand to teach masterclasses across the country.

Why did you choose your instrument?
I saw it on Sesame Street when I was 4 and fell in love.

What's the most interesting or difficult facet of your instrument?
Flute is the only wind instrument where most of the air you blow doesn't even go into the instrument.

What do you do in your free time outside of work?
Cook, travel, teach flute, hang out with my daughters, and exercise.

Most interesting or unusual place you've played a concert?
Favorite venue of all time is Musikverein in Vienna. I've played six concerts there, the first one was with the ASO!