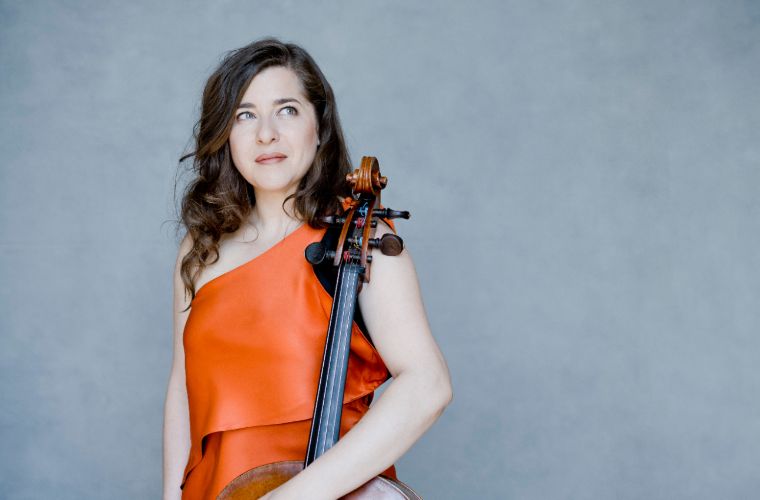 Home About the ASO Alisa Weilerstein

“A young cellist whose emotionally resonant performances of both traditional and contemporary music have earned her international recognition, … Weilerstein is a consummate performer, combining technical precision with impassioned musicianship,” stated the MacArthur Foundation, when awarding American cellist Alisa Weilerstein a 2011 MacArthur Fellowship.

Entering her second season as Artistic Partner with the Trondheim Soloists, Weilerstein joins the ensemble on two European tours this fall, including appearances in Norway, London, Munich and Bergen. Their first album together, 2018’s Transfigured Night released on Pentatone, features Schoenberg’s Verklärte Nacht and both Haydn cello concertos. It attracted unanimous praise, with Gramphone magazine proclaiming, “you’d go far to find performances of the Haydn concertos that match Alisa Weilerstein’s mix of stylistic sensitivity, verve and spontaneous delight in discovery.” Beyond the partnership with the Trondheim Soloists Weilerstein’s 19-20 concert highlights include Saint-Saëns’s First Cello Concerto with the New York Philharmonic, Shostakovich’s Cello Concerto No. 2 with Tokyo’s NHK Symphony, Britten’s Symphony for Cello and Orchestra with Zurich’s Tonhalle Orchestra, Schumann Cello Concerto with the Houston Symphony, Barber Cello Concerto with the Detroit Symphony, Strauss’ Don Quixote and Bloch’s Scholmo with the San Diego Symphony, and Elgar’s Cello Concerto with the London Symphony Orchestra, both at the Barbican in London and the Philharmonie in Paris. In recital, she gives solo performances of Bach’s complete cello suites in California, Barcelona, Manchester, and joins her frequent duo partner, Inon Barnatan, for Brahms and Shostakovich at London’s Wigmore Hall, Milan’s Sala Verdi and Amsterdam’s Concertgebouw. To celebrate Beethoven’s 250th anniversary, she rejoins the Israeli pianist for a U.S. recital tour of all five of the composer’s cello sonatas, besides playing Beethoven’s Triple Concerto with Guy Braunstein, Barnatan, and the Dresden Philharmonic. Her recording of the concerto, featuring Alan Gilbert, Stefan Jackiw, Barnatan, and the Academy of St. Martin in the Fields, is due for release by Pentatone this fall.

In recent years, Weilerstein recorded the Elgar and Elliott Carter cello concertos with Daniel Barenboim and the Staatskapelle Berlin. The disc was named “Recording of the Year 2013” by BBC Music, which featured the cellist on the cover of its May 2014 issue. Her release of Dvořák’s Cello Concerto with the Czech Philharmonic, topped the U.S. classical chart. Her third album, a compilation of unaccompanied 20th-century cello music titled Solo, was pronounced an “uncompromising and pertinent portrait of the cello repertoire of our time” (ResMusica, France). Solo’s centerpiece is the Kodály sonata, a signature work that Weilerstein revisits on the soundtrack of If I Stay, a 2014 feature film starring Chloë Grace Moretz in which the cellist makes a cameo appearance as herself. In 2015 she released a recording of sonatas by Chopin and Rachmaninoff, marking her duo album debut with Inon Barnatan. In 2016 she released a “powerful and even mesmerizing” recording (San Francisco Chronicle) of Shostakovich’s cello concertos with the Bavarian Radio Symphony and Pablo Heras-Casado.

Weilerstein’s career milestones include an emotionally tumultuous account of Elgar’s concerto with the Berlin Philharmonic and Barenboim in Oxford, England, and a performance at the White House for President and Mrs. Obama. An ardent champion of new music, she has worked on multiple projects with Osvaldo Golijov and Matthias Pintscher and premiered works by Lera Auerbach and Joseph Hallman. Weilerstein, whose honors include Lincoln Center’s 2008 Martin E. Segal prize and the 2006 Leonard Bernstein Award, is a graduate of the Cleveland Institute of Music and Columbia University. Diagnosed with type 1 diabetes, she is a Celebrity Advocate for the Juvenile Diabetes Research Foundation.