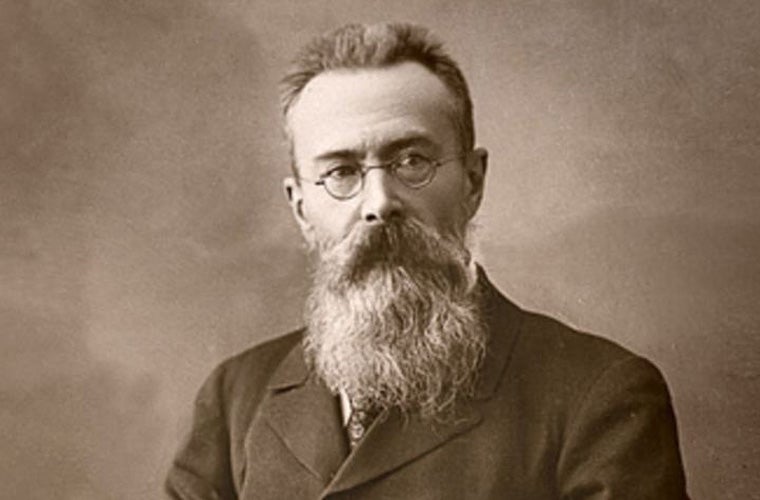 Nikolai Rimsky-Korsakov (1844–1908) was a Russian composer, and a member of the group of composers known as The Five. New York's Musical Courier was not so far from the mark when it reported in 1897: "Rimsky-Korsakov — what a name! It suggests fierce whiskers stained with vodka."

Rimsky began his professional life by following family tradition as a naval officer. It was his contact with Balakirev, spiritual mentor of the group known as the 'Kuchka' or 'Mighty Handful' — that inspired him to start composing seriously.

His first work was nothing less than a full-scale symphony — the first by a modern Russian composer — written when he was still largely ignorant of basic harmonic and contrapuntal principles. So great was the work's impact that although he still held only a tenuous grasp on compositional procedures, he was appointed a full-time professor at the St. Petersburg Conservatory.

During the last two decades of his life he concentrated his attention on creating 'fantastical' operatic worlds built almost entirely on magical combinations of timbres, harmonies and tonal colours, climaxing in The Golden Cockerel.

Rimsky was way ahead of his time, anticipating by 50 years the position adopted by many composers of the post-war avant-garde. And yet he loathed modernist tendencies. His most famous pupil, Igor Stravinsky, recalled a performance they had attended of Debussy's La Mer shortly before Rimsky's death: "I asked Rimsky-Korsakov what he thought. He replied, "Better not listen to it; you risk getting used to it, and then you might even end up liking it."