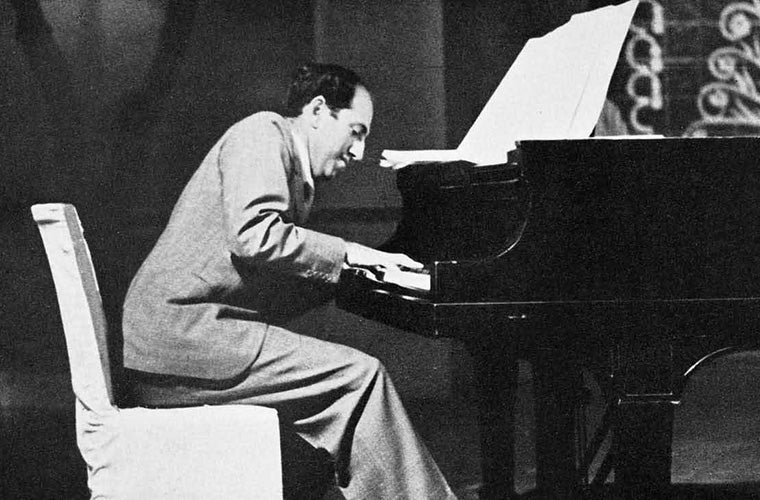 George Gershwin was born in Brooklyn, New York, on 26 September 1898, and began his musical training at thirteen. At fifteen he quit high school to work as a pianist and 'song plugger' for a music publisher, and soon he was writing songs. Swanee, introduced by Al Jolson, brought Gershwin his first real fame. But it was George and his older brother Ira who became the dominant Broadway songwriters to emerge during the 1920s, creating a ceaseless flow of brisk, infectious rhythms and affectingly poignant ballads. Working together, they fashioned the words to fit the melodies with a 'glove-like fidelity'. This extraordinary collaboration led to a succession of 22 musical comedies, among them Lady, Be Good! (1924), Oh, Kay! (1926). Funny Face (1927), Strike Up The Band (1927 & 1930), Girl Crazy (1930), and Of Thee I Sing (1931), the first musical comedy to win a Pulitzer Prize.

Over the years, Gershwin songs have also been used in numerous films and in the award-winning stage musicals My One And Only (1983) and Crazy For You, which opened on Broadway in 1992. Crazy For You is loosely based on Girl Crazy, with a new libretto by Ken Ludwig, and has an impressive roster of George and Ira songs including two previously unpublished songs. Crazy For You opened in the West End on March 3, 1993, at the Prince Edward Theatre.

From his early career Gershwin had ambitions to compose serious music. Asked by Paul Whiteman to write an original work for a special modern concert to be presented at Aeolian Hall in New York on 12 February 1924, Gershwin, who was hard at work on a musical comedy, barely finished his composition in time. But from the first low chuckle of the solo clarinet and its spine-tingling run up the scale. Rhapsody In Blue caught the public's fancy and opened a new era in American music.

In 1925 the eminent conductor Walter Damrosch commissioned Gershwin to compose a piano concerto for the New York Symphony Society. Many feel that this Concerto In F is Gershwin's finest orchestral work. Others opt for his An American In Paris (1928) or his Second Rhapsody for piano and orchestra, which he introduced with himself as pianist with the Boston Symphony under Koussevitzsky in 1932.

Gershwin, fascinated by the DuBose Heyward novel Porgy, recognised it as a perfect vehicle for opera using blues and jazz idioms. What he called a 'folk opera,' Porgy And Bess (co-written with Dubose and Dorothy Heyward and Ira Gershwin) was the Gershwin brothers' most ambitious undertaking, tightly integrating unforgettable songs with drama. Porgy And Bess was first performed in Boston on 30 September 1935 and opened on Broadway on 10 October. In addition to its 1942 and 1953 revivals and subsequent world tours, it was made into a major motion picture in 1959.

In 1937 George Gershwin was at the height of his career. His symphonic works and three Preludes For Piano were becoming part of the standard repertory for concerts and recitals, and his lighter songs had brought him ever increasing fame and fortune. It was in Hollywood, while he was working on the score of The Goldwyn Follies, that George Gershwin collapsed and on July 11, 1937, died of a brain tumour. He was not quite 39 years old. Countless people throughout the world, who knew George Gershwin only through his work, were stunned by the news as if they had suffered a personal loss. John O'Hara summed up their feelings at the time: "George Gershwin died July 11, 1937, but I don't have to believe it if I don't want to."

Today, George Gershwin's works are sung and played with ever greater frequency than they were in his brief lifetime. The songs and concert pieces are proving to be not in the least ephemeral as a glance at the pages of any record catalogue will quickly show.


Reprinted by kind permission of Warner/Chappell