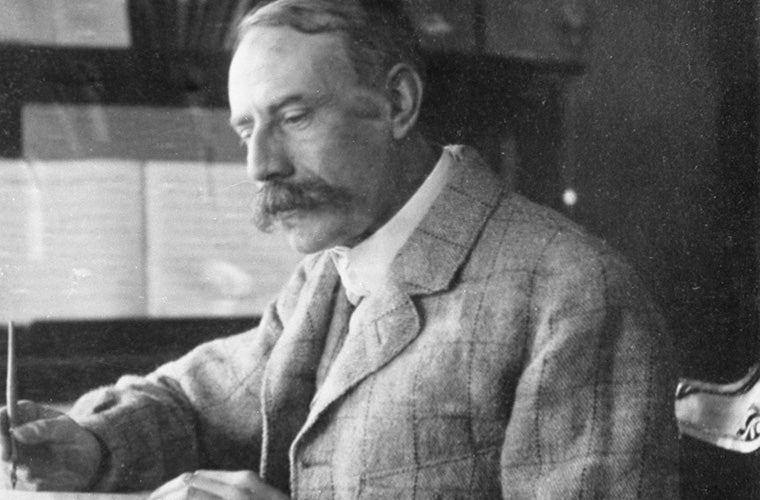 Sir Edward William Elgar (1857–1934) was an English composer, among whose best-known compositions are orchestral works including the Enigma Variations, the Pomp and Circumstance Marches, concertos for violin and cello, and two symphonies.

Elgar's father owned a music shop and was a church organist who taught his son piano, organ, and violin; apart from this instruction, Elgar was basically self-taught as a musician.

At the age of 16, the composer became a freelance musician and for the remainder of his life never took a permanent job. He conducted locally, performed, taught, and composed, scraping by until his marriage to Caroline Alice Roberts, a published novelist of some wealth, in 1889.

In 1899, Elgar composed one of his best-known works, the "Enigma" Variations, Op. 36, which catapulted him to fame. The work is a cryptic tribute to Alice and to the many friends who stood behind the composer in the shaky early days of his career.

Elgar's most fruitful period was the first decade of the twentieth century, during which he wrote some of his noblest, most expressive music, including the first four of his Pomp and Circumstance Marches; the first of these, subtitled "Land of Hope and Glory", became an unofficial second national anthem for the British Empire.

Elgar suffered a blow when Jaeger (the "Nimrod" of the "Enigma" Variations) died in 1909. The composer's productivity dropped, and the horrors of World War I deepened his melancholic outlook.

In 1919 Elgar wrote the masterly Cello Concerto in E minor, Op. 85, whose deep feeling of sadness and impending loss surely relates to the final illness of his faithful Alice, who died in 1920.