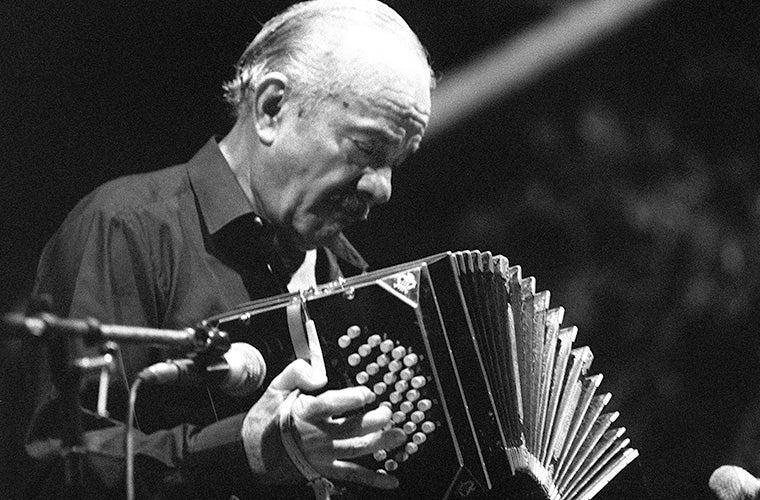 Astor Piazzolla (1921–1992) was an Argentine tango composer and bandoneón player. His oeuvre revolutionised the traditional tango into a new style termed nuevo tango, incorporating elements from jazz and classical music.

Astor Piazzolla spent most of his childhood with his family in New York City, where he was exposed to both jazz and the music of JS Bach at an early age.

In 1950 he composed the soundtrack to the film Bólidos de Acero.

In 1953 Piazzolla entered his Buenos Aires Symphony in a composition contest, and won a grant from the French government to study in Paris with the legendary French composition teacher Nadia Boulanger.

Piazzolla returned from New York to Argentina in 1955, formed the Octeto Buenos Aires with Enrico Mario Francini and Hugo Baralis on violins, Atilio Stampone on piano, Leopoldo Federico as second bandoneon, Horacio Malvicino on electric guitar, José Bragato on cello and Juan Vasallo on double bass to play tangos, and never looked back.

In 1990 he suffered thrombosis in Paris, and died two years later in Buenos Aires.

Among his followers, his own protégé Marcelo Nisinman is the best known innovator of the tango music of the new millennium, while Pablo Ziegler, pianist with Piazzolla's second quintet, has assumed the role of principal custodian of nuevo tango, extending the jazz influence in the style.

In the summer of 1985 he appeared with his Quinteto Tango Nuevo at the Almeida Theatre in London for a week-long engagement. On September 6, 1987, his quintet gave a concert in New York's Central Park, which was recorded and, in 1994, released in compact disk format as The Central Park Concert.