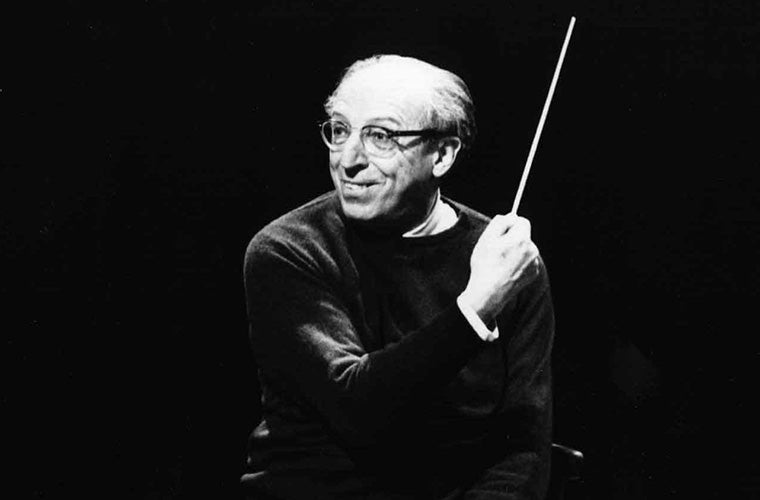 Copland, the son of Russian-Jewish immigrants, was born in New York City and attended public schools there. An older sister taught him to play the piano, and by the time he was 15 he had decided to become a composer. As a first step Copland tried to learn harmony through a correspondence course. Haltingly and in an environment not particularly conducive to art, he struggled toward his goal.

In the summer of 1921 Copland attended the newly founded school for Americans at Fontainebleau, where he came under the influence of Nadia Boulanger, a brilliant teacher who shaped the outlook of an entire generation of American musicians. He decided to stay on in Paris, where he became Boulanger’s first American student in composition. After three years in Paris, Copland returned to New York City with an important commission: Nadia Boulanger had asked him to write an organ concerto for her American appearances. Copland composed the piece while working as the pianist of a hotel trio at a summer resort in Pennsylvania. That season the Symphony for Organ and Orchestra had its premiere in Carnegie Hall with the New York Symphony under the direction of the composer and conductor Walter Damrosch.

In his growth as a composer Copland mirrored the important trends of his time. After his return from Paris, he worked with jazz rhythms in Music for the Theater (1925) and the Piano Concerto (1926). There followed a period during which he was strongly influenced by Igor Stravinsky’s Neoclassicism, turning toward an abstract style he described as “more spare in sonority, more lean in texture.” This outlook prevailed in the Piano Variations (1930), Short Symphony (1933), and Statements for Orchestra (1933–35). After this last work, there occurred a change of direction that was to usher in the most productive phase of Copland’s career. He well summed up the new orientation: “During these years I began to feel an increasing dissatisfaction with the relations of the music-loving public and the living composer. It seemed to me that we composers were in danger of working in a vacuum.” Furthermore, he realized that a new public for modern music was being created by the new media of radio, phonograph, and film scores: “It made no sense to ignore them and to continue writing as if they did not exist. I felt that it was worth the effort to see if I couldn’t say what I had to say in the simplest possible terms.” Copland therefore was led to what became a most significant development after the 1930s: the attempt to simplify the new music in order that it would have meaning for a large public.

The decade that followed saw the production of the scores that spread Copland’s fame throughout the world. Most important of these were the three ballets based on American folk material: Billy the Kid (1938), Rodeo (1942), and Appalachian Spring (1944; commissioned by dancer Martha Graham). To this group belong also El salón México (1936), an orchestral piece based on Mexican melodies and rhythms; two works for high-school students — the “play opera” The Second Hurricane (1937) and An Outdoor Overture (1938); and a series of film scores, of which the best known are Of Mice and Men (1939), Our Town (1940), The Red Pony (1948), and The Heiress (1948). Typical too of the Copland style are two major works that were written in time of war — Lincoln Portrait (1942), for speaker and chorus, on a text drawn from Lincoln’s speeches, and Letter from Home (1944), as well as the melodious Third Symphony (1946).

In his later years Copland refined his treatment of Americana: “I no longer feel the need of seeking out conscious Americanism. Because we live here and work here, we can be certain that when our music is mature it will also be American in quality.” His later works include an opera, The Tender Land (1954); Twelve Poems of Emily Dickinson (1950), for voice and piano; and the delightful Nonet (1960). During these years Copland also produced a number of works in which he showed himself increasingly receptive to the serial techniques of the so-called 12-tone school of composer Arnold Schoenberg. Notable among such works are the stark and dissonant Piano Fantasy (1957); Connotations (1962), which was commissioned for the opening of Lincoln Center for the Performing Arts in New York City; and Inscape (1967). The 12-tone works were not generally well-received; after 1970 Copland virtually stopped composing, though he continued to lecture and to conduct through the mid-1980s.

For the better part of four decades, as composer (of operas, ballets, orchestral music, band music, chamber music, choral music, and film scores), teacher, writer of books and articles on music, organizer of musical events, and a much sought after conductor, Copland expressed “the deepest reactions of the American consciousness to the American scene.” He received more than 30 honorary degrees and many additional awards. His books include What to Listen for in Music (1939), Music and Imagination (1952), Copland on Music (1960), and The New Music, 1900–60 (1968). With the aid of Vivian Perlis, he wrote a two-volume autobiography (Copland: 1900 Through 1942 [1984] and Copland: Since 1943 [1989]).