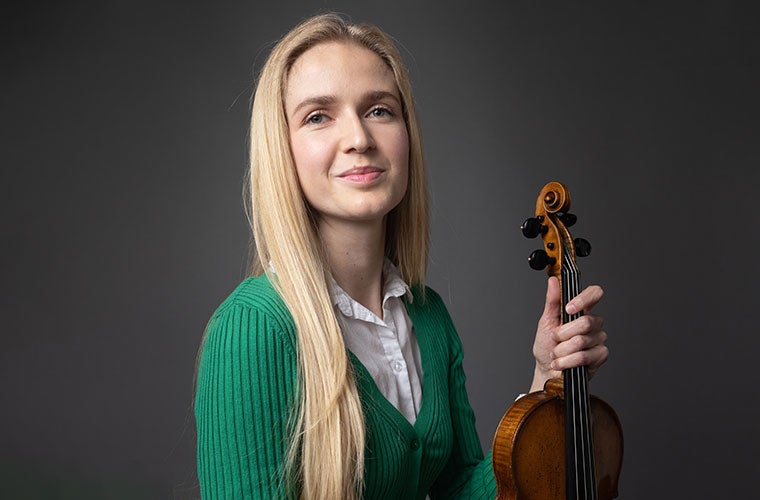 Ostler is a former member of the San Jose Chamber Orchestra and the New Haven Symphony and has performed as guest concertmaster and soloist with the Young Artist Debut Orchestra and the American Youth Symphony. She has performed extensively with the San Francisco Symphony, the Los Angeles Philharmonic, and the St. Louis Symphony. A recent graduate of the Yale School of Music, she served as concertmaster with the Yale Philharmonia while studying with Ani Kavafian. Previously she studied at the Colburn Conservatory under the tutelage of Robert Lipsett and Arnold Steinhardt.

Ostler performs on a 1774 Antonio Gragnani.

What's the most interesting or difficult facet of your instrument?
Not easy to answer this! But I think the most interesting facet of the violin is its versatility: it's a stringed instrument, so it's able to fit into that warm, lush sound that composers rely on from strings, but then it is so easily mobile and acrobatic, which means you rarely get a rest as a violinist, and then with its high range on the E string it can even be strident and almost brassy. I think the difficulty in playing violin often stems from composers having really gotten quite good at exploring the limits of that versatility.

What do you do in your free time outside of work?
Read, play tennis, leisurely bike rides, hiking

Most interesting or unusual place you've played a concert?
A plane hangar in a little town outside of Dresden, Germany

What is your go-to karaoke song?
"(You Make Me Feel Like) A Natural Woman" by Aretha Franklin