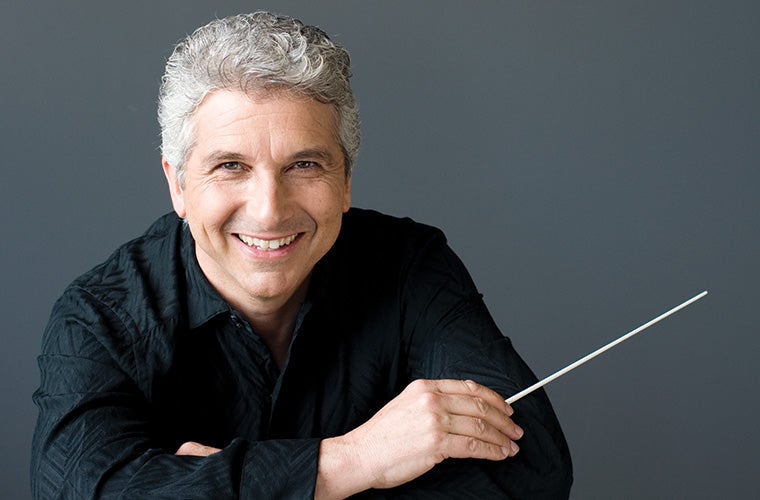 Home About the ASO Peter Oundjian

Recognized as a masterful and dynamic presence in the conducting world, Peter Oundjian has developed a multi-faceted portfolio as a conductor, violinist, professor and artistic advisor. He has been celebrated for his musicality, an eye towards collaboration, innovative programming, leadership and training with students and an engaging personality.

Now carrying the title of Conductor Emeritus, Oundjian's fourteen-year tenure as Music Director of the Toronto Symphony served as a major creative force for the city of Toronto and was marked by a reimagining of the TSO's programming, international stature, audience development, touring and a number of outstanding recordings, garnering a Grammy nomination in 2018 and a Juno award for Vaughan Williams' Orchestral Works in 2019. He led the orchestra on several international tours to Europe and the USA, conducting the first performance by a North American orchestra at Reykjavik's Harpa Hall in 2014.

From 2012-2018, Oundjian served as Music Director of the Royal Scottish National Orchestra during which time he implemented the kind of collaborative programming that has become a staple of his directorship. Oundjian led the RSNO on several international tours, including North America, China, and a European festival tour with performances at the Bregenz Festival, the Dresden Festival as well as in Innsbruck, Bergamo, Ljubljana, and others. His final appearance with the orchestra as their Music Director was at the 2018 BBC Proms where he conducted Britten's epic War Requiem.

Highlights of past seasons include appearances with the Orchestre de la Suisse Romande, the Detroit, Atlanta, Saint Louis, Baltimore, Indianapolis, Milwaukee and New Zealand Symphony Orchestra. With the onset of world-wide concert cancellations support for students at Yale and Juilliard and the creation of a virtual summer festival in Boulder where he is Music Director of Colorado Music Festival became a priority. Winter 2021 saw the resumption of some orchestral activity with streamed events with Atlanta, Colorado, Indianapolis and Dallas symphonies. The 21/22 season anticipates return visits to Toronto, Kansas City, Seattle, Colorado, Detroit, Baltimore and Indianapolis.

Oundjian has been a visiting professor at Yale University's School of Music since 1981, and in 2013 was awarded the school's Sanford Medal for Distinguished Service to Music. A dedicated educator, Oundjian conducted the Yale and Juilliard Symphony Orchestras and the New World Symphony during the 18/19 season.

An outstanding violinist, Oundjian spent fourteen years as the first violinist for the renowned Tokyo String Quartet before he turned his energy towards conducting.