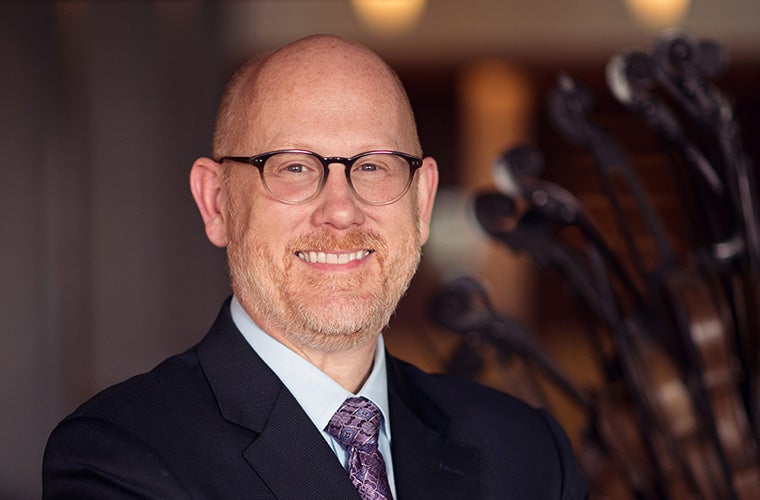 Arts and higher-education executive, speaker and strategist Paul Hogle was appointed as the ninth president and chief executive officer of the venerable Cleveland Institute of Music in July 2016, following a three-decade career of successful executive leadership for America's most respected, innovative, and accomplished classical music institutions. With an enviable track record of pursuing mission-centered strategy, Hogle has developed a vast network of leaders in the performing arts community having worked, partnered, and consulted in America, Australia, and Japan.

With Hogle's arrival in Cleveland, CIM began a journey of engagement, conversation, and planning prompted by the ambitious assignment of crafting a new strategic plan for a new century. The results have been remarkable, including the highest-rated incoming classes in a generation, a 338% increase in the diversity of CIM’s student body since 2016, recruiting top faculty and administrative talent, growing annual support by 70% while adding over $16 million of new commitments to the endowment, breaking ground and opening a state-of-the-art student housing complex, increasing the school's marketing and presence in Cleveland, recruiting a nationally significant roster of guest conductors to lead the CIM orchestra, building and strengthening alliances with conservatories across China and Europe, and, in pursuit of paying CIM's civic rent, inaugurating an annual day of service — all while opening the CIM campus to new and legacy arts and community partners, lowering tuition by 15%, increasing scholarship funds by $1 million annually, and strengthening fiscal equilibrium. CIM recently extended Hogle's tenure with an unprecedented 7-year contract.

Cleveland Institute of Music
The Cleveland Institute of Music empowers the world's most talented classical music students to fulfill their dreams and potential. Its graduates command the most celebrated and revered stages in the world as soloists, chamber musicians and ensemble members; compose meaningful, award-winning new repertoire; and are highly sought-after teaching artists, administrators and thought leaders. A testament to the excellence of a CIM education, more than half of the members of The Cleveland Orchestra are connected to CIM as members of the faculty, alumni or both. All students benefit from access to world-renowned visiting artists and conductors, intensive study with CIM's stellar faculty and the rich curriculum offered by CIM's partner Case Western Reserve University. In fall 2020, the diversity of CIM’s student body increased by a remarkable 338% since 2016 and represents 12% of the Institute's approximately 325 students. CIM is an integral part of Cleveland's arts community, presenting nearly 600 free performances and master classes on campus each year, and hundreds more at locations throughout the region, including Severance Hall. Explore cim.edu to learn more.