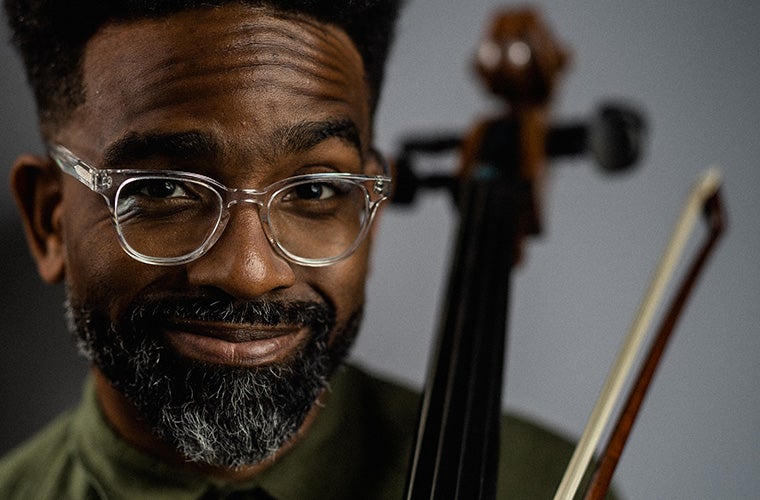 Okorie "OkCello" Johnson is an American cellist-songwriter whose artistry integrates cello performance, live-sound-looping, improvisation, and storytelling - all culminating in original compositions that collide classical with jazz, EDM, reggae, and funk.

His music is inspired by the exploration of African Diasporic melodies and narratives and their intersection with people's perceptions and assumptions about the classical and european nature of the cello.  As well, his work with improvisation attempts to embody the phenomenon of wordless prayer.

In 2021, Okorie OkCello Johnson was selected to be one of the presenters at the Democratic Republic of the Congo Biennale (Scheduled for September 2022) for his proposal of a sound installation project entitled "Vessel of Breath," a meditative cello composition comprised of harvested sound, collaborative compositions, and community interviews. In addition, he was selected to participate in the Kennedy Center's artist residence program entitled Office Hours (scheduled for March 2022), in which he will begin workshopping the process for the sound installation project above.  2021 also saw his inclusion in the InStyle February issue, which identified him as a member of the "Creative Class Making Atlanta the New Epicenter of American Arts." He was also identified in Atlanta Magazine's "Atlanta Rising Creative Class [that] Is Gaining New Recognition on the National Scene."  Finally, a documentary he scored for the Atlanta Journal Constitution, "Imperfect Alibi" won a regional Emmy, he released his third studio project Beacon in September of 2021, and in December, he released a holiday album entitled, An OkChristmas.

In 2020 Okorie was commissioned by Flux Projects to create improvisational work entitled "Stir Crazy" directly responding to the isolation that stemmed from the COVID19 quarantines.  He then collaborated with visual artist Fahamu Pecou and poet Jon Goode to create a performance art piece entitled HUE+MEN that, in response to the murders of George Floyd, Ahmaud Arbery and Breonna Taylor, asserted through sound, imagery, and poetry the sanctity and power of Black humanity.  He also went on to be selected by Emory University to participate in its inaugural Arts and Social Justice Fellowship program, created by the Emory Center for Ethics. In that program, he and 5 other Atlanta artists were commissioned to create in collaboration with Emory professors and their classes pieces of art that spoke to the racial reckoning that the US experienced that summer.

In 2019, he had the honor of performing at SXSW for Choose ATL and the Atlanta Convention and Visitors Bureau, performing at the Oak Hill Stage of the Atlanta Jazz Festival, opening for Grammy award winning artist Van Hunt, being a featured artist on the Story2019 festival at the Schermerhorn Symphony Center in Nashville, opening for Grammy award winning recording artist Maxwell at the Cadence Bank Amphitheatre at Chastain Park, and being invited to perform in Havana, Cuba at the classical music festival Habana Classica, which coincided with the 500th birthday of that capital city.

He is a recipient of the Alliance Theatre's 2018 Reiser Atlanta Artists Lab grant, and a 2018 Creative Loafing Readers' Choice winner for Best Local Jazz Act. His sophomore album Resolve was named one of ArtsATL's top local albums of 2018.

Furthermore, over his career, Okorie has had the opportunity to perform and/or record with India.Arie, De La Soul, and Big Boi of OutKast, amongst many others.

"Hereness is the first of all sacred things." – OkCello