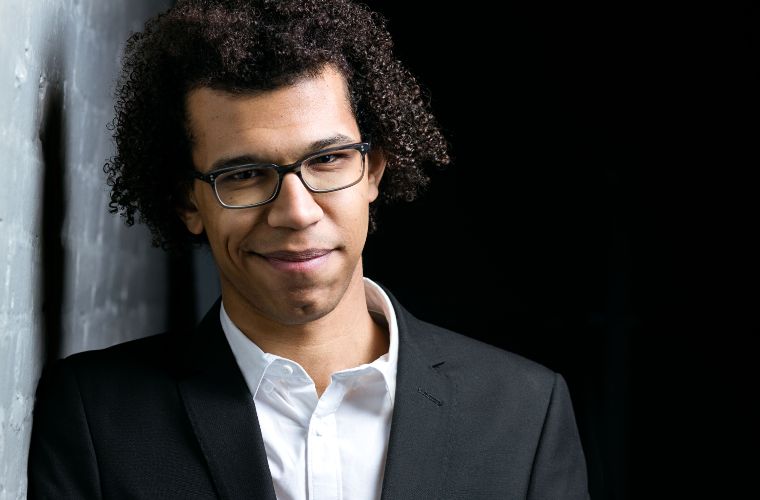 Home About the ASO Jonathon Heyward

Jonathon Heyward is forging a career as one of the most exciting young conductors on the international scene. Winner of the 2015 Besançon International Conducting Competition, Jonathon was selected as a Los Angeles Philharmonic Dudamel Conducting Fellow for the 2017-2018 season, later stepping in to make his subscription debut with Hilary Hahn as part of the orchestra’s Bernstein @ 100 Celebration at Walt Disney Concert Hall. The LA Times declared that he had ‘forged a seamless connection among the music, the orchestra, and the audience’ and that ‘his concert augurs great things to come’.

Named Chief Conductor Designate of the Nordwestdeutsche Philharmonie in 2019, a position that commences in January 2021, Jonathon recently completed three years as Assistant Conductor of the Hallé Orchestra, conducting his first subscription concert with Benjamin Grosvenor in 2018. Other notable moments with the ensemble include: a 200th birthday concert for the orchestra’s founder, Sir Charles Hallé, with a programme of Hallé’s own Souvenir and Scherzo, Beethoven’s Leonora No. 3 Overture, Mozart’s Piano Concerto No. 17 (with Heejae Kim) and Sibelius’ Symphony No. 5; a finalist nomination for Young Creative of the Year at the Manchester Culture Awards 2018, in recognition of his extensive community outreach work and commitment to music education as Music Director of the Hallé Youth Orchestra; and a ‘roaringly bold account’ (Bachtrack) of Shostakovich’s thrilling Leningrad Symphony, marking Jonathon’s debut at the Manchester International Festival and culmination of his tenure in Manchester.

Originally trained as a cellist and chamber musician, Jonathon went on to take up the position of Assistant Conductor for both their opera department and the Boston Opera Collaborative, where he worked on such productions as La Bohème, Die Zauberflöte, and The Rape of Lucretia. In 2013, Jonathon became the youngest ever semi-finalist at the Blue Danube International Opera Conducting Competition at the age of 21, and, soon after, was appointed Associate Director of the Hampstead Garden Opera Company in London. In 2016, he completed his postgraduate studies in conducting with Sian Edwards at the Royal Academy of Music, and in 2020, was named an Associate of the Royal Academy as well as a Sir Georg Solti Fellow.