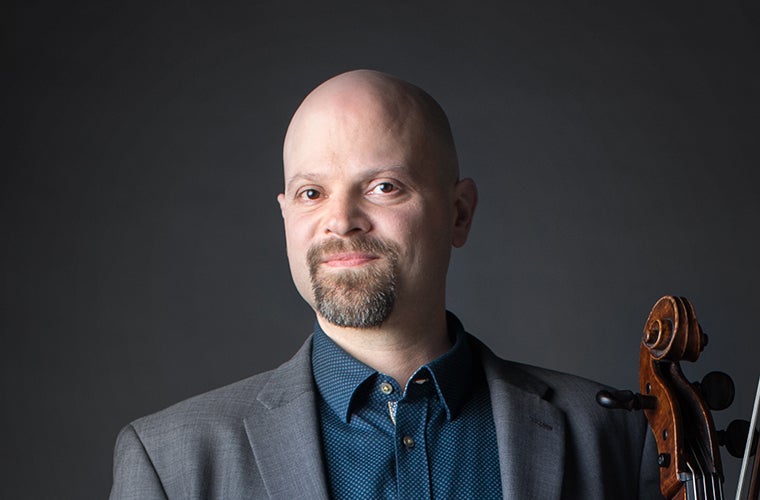 Joel Dallow has been a member of the cello section of the Atlanta Symphony Orchestra since 1999, and currently holds the honorary UPS Community Service Chair. He also serves as Artistic Director and Founder of Riverside Chamber Players, Inc. and from 2016 – 2020 served on the faculty at Georgia State University as Artist Affiliate. He is the producer and host of The Cello Sherpa Podcast, where he covers topics related to the journey from intermediate musician to the professional stage. He performs on an Edmund Aireton cello made in London in 1750.

Mr. Dallow studied with Stephen Kates, Orlando Cole, William Stokking, Myron Lutzke, David Geber and Crispin Campbell. He is a 1994 graduate of the Peabody Conservatory of Music of the Johns Hopkins University and was awarded the Israel Dorman award for excellence in performance.

Chamber music remains one of Mr. Dallow's passions. In 2003, he established Riverside Chamber Players, Inc. and currently serves as Artistic Director and cellist. Riverside's mission is to present chamber music performances of the highest professional quality providing artistic, educational, and cultural enrichment for the local communities. He also performs with the Chamber Music Festival of the Black Hills, in Rapid City, South Dakota. Mr. Dallow has performed regularly with Music For All Seasons, Inc., an organization devoted to providing the healing power of music to communities that may otherwise not have access to music for enjoyment: residents of hospitals, nursing homes, geriatric centers, prisons, and special facilities for children.

From the recording studio, Mr. Dallow's performances can be heard on many of the Atlanta Symphony's Grammy award-winning albums, in addition to "The Music of Michael Kurth" and "I've Been to the Ocean" performed by the Riverside Chamber Players, available at www.riversidechamberplayers.org or through Amazon, iTunes, and CD Baby.

Mr. Dallow maintains an extensive private studio that has launched many young cellists into university music programs nationwide over a period of two decades. He also served on the faculty of Georgia State University as Artist Affiliate from 2016 – 2020 and was previously a member of the faculty for the Atlanta Symphony’s Talent Development Program. As a passionate advocate for arts education in the Fulton County School System, he was recognized by the Georgia American String Teachers Association with the 2011 Advocacy Award.

Mr. Dallow was born as the second of triplets, and grew up in Plainfield, New Jersey in a musical family. His mother is a concert pianist, music critic, and published author, and his father is a pianist and composer. He has three adult children, and resides in Roswell, Georgia.

What's the most interesting or difficult facet of your instrument?
The fact that the combination of horse hair, metal, and wood can mimic the human voice is amazing, but the challenge of playing the instrument at the highest level possible never diminishes.

What do you do in your free time outside of work?
I enjoy home improvement projects, woodworking, painting, and cooking.

Do you come from a musical family?
Yes, both my parents are pianists. My father is also a composer and had the opportunity to sing in the boys choir for the coronation of the queen of England in 1952.

What is your post-concert routine?
I commute home to Roswell letting my brain unwind from focusing intently for the past few hours and then get in my hot tub so my muscles can also unwind.

Most memorable/favorite ASO memory or moment?
Performing with Stevie Wonder.