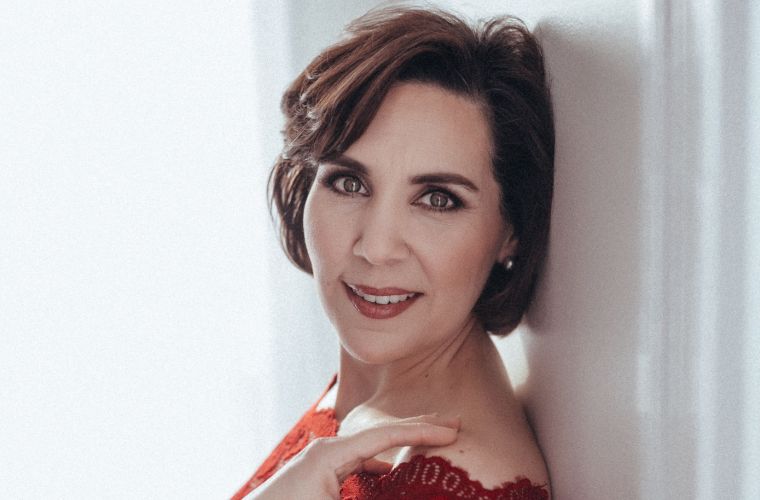 Home About the ASO Jessica Rivera

Possessing a voice praised by the San Francisco Chronicle for its “effortless precision and tonal luster,” Grammy® Award-winning soprano Jessica Rivera is one of the most creatively inspired vocal artists performing before the public today. The intelligence, dimension and spirituality with which she infuses her performances on great international concert and opera stages has garnered Rivera unique artistic collaborations with many of today’s most celebrated composers, including John Adams, Osvaldo Golijov, Gabriela Lena Frank, Jonathan Leshnoff, Nico Muhly, and Paola Prestini, and has brought her together with such esteemed conductors as Gustavo Dudamel, Sir Simon Rattle, Esa-Pekka Salonen, Robert Spano, Markus Stenz, Bernard Haitink, and Michael Tilson Thomas.

During the 2019/20 season, Rivera returns to the Aspen Music Festival for an evening of Spanish art songs with guitarist Sharon Isbin. She performs Golijov’s La Pasión según San Marcos in her debut with the Minnesota Orchestra, led by María Guinand. Additional orchestral engagements include Beethoven’s Missa solemnis with the Colorado Symphony and Brett Mitchell, Golijov’s She Was Here with the Milwaukee Symphony and Ken-David Masur, Mahler’s Symphony No. 2, "Resurrection,” with the Grand Rapids Symphony and Marcelo Lehninger, and Frank’s Conquest Requiem with the Nashville Symphony and Giancarlo Guerrero in a performance to be recorded live for future release on Naxos.

A champion of new music, Rivera recently gave the world premiere of Nico Muhly’s The Right of Your Senses, commissioned by the Los Angeles Philharmonic and performed by the National Children’s Chorus and the American Youth Symphony conducted by Carlos Izcaray at Walt Disney Concert Hall. A major voice in the rich culture of Latin American music and composers, Rivera recently performed in Antonio Lysy’s beloved Te Amo Argentina with Arizona Friends of Chamber Music and partnered with pianist Mark Carver for a recital titled Homage to Victoria de los Angeles at The Society of the Four Arts in Palm Beach, Florida. Recent seasons have seen Rivera premiere Gabriela Lena Frank’s Conquest Requiem with the Houston Symphony and Chorus conducted by Andrés Orozco-Estrada, and perform John Harbison’s Requiem with the Nashville Symphony and Chorus under Giancarlo Guerrero, recorded and released on the Naxos label in October 2018.

Rivera treasures her decade-long collaboration with Robert Spano and the Atlanta Symphony Orchestra, and was recently featured as soprano soloist in Brahms’s Ein deutsches Requiem and Jonathan Leshnoff’s Zohar with the ASO and Chorus at Carnegie Hall. Additionally, she joined Spano for Richard Strauss’s Four Last Songs with the Fort Worth Symphony and for Christopher Theofanidis’s Creation/Creator in Atlanta and at the Kennedy Center’s 2017 SHIFT Festival of American Orchestras. Here she also sang Robert Spano’s Hölderlin Lieder, a song cycle written specifically for her and recorded on the ASO Media label.

Recent orchestral highlights include Gabriela Lena Frank’s La Centinela y la Paloma with the Aspen Philharmonic Orchestra led by Federico Cortese, Barber’s Knoxville: Summer of 1915 with Jerry Hou at the Grand Teton Music Festival, Mozart’s Requiem with the Louisville Orchestra conducted by Teddy Abrams, Handel’s Messiah with the Nashville Symphony and Giancarlo Guerrero, Beethoven’s Ninth Symphony with the Atlanta Symphony Orchestra conducted by Thomas Søndergård, Mahler’s Fourth Symphony with Colombia’s Orquestra Filarmónica de Bogotá led by Juan Felipe Molano, the Mozart Requiem with the San Diego Symphony under the baton of Markus Stenz and with Roberto Abbado leading the Atlanta Symphony Orchestra, Brahms Requiem with the Kansas City Symphony, the Mozart orchestration of Handel’s Messiah with Ottawa’s National Arts Centre Orchestra with Alexander Shelley, Esa-Pekka Salonen’s Five Images After Sappho and Poulenc’s Gloria with the Colorado Symphony, Beethoven’s Ninth Symphony with the Grand Rapids Symphony, Barber’s Knoxville: Summer of 1915 with Karina Canellakis and the Detroit Symphony Orchestra, Strauss’s Orchesterlieder with Johannes Stert and the Orquestra Sinfónica Portuguesa in Lisbon, and Górecki’s Symphony No. 3 with Gustavo Dudamel and the Los Angeles Philharmonic, among many others. She joined in the celebrations of Leonard Bernstein’s centennial at the Celebrity Series of Boston’s What Makes It Great with Rob Kapilow and performed the role of Eileen in Bernstein’s Wonderful Town for her debut with the Seattle Symphony conducted by Ludovic Morlot.

Rivera has worked closely with John Adams throughout her career, and received international praise for the world premiere of A Flowering Tree, singing the role of Kumudha in a production directed by Peter Sellars at Vienna’s New Crowned Hope Festival. Under Adams’s baton, she has sung the role with the San Francisco Symphony, Los Angeles Philharmonic, Orchestra of St. Luke’s at Lincoln Center and the London Symphony Orchestra at the Barbican Centre. She has also performed Kumudha in her debut with the Berlin Philharmonic and Sir Simon Rattle, the Teatro Nacional de São Carlos in Lisbon and the Cincinnati Opera led by Joana Carneiro. Rivera made her European operatic debut as Kitty Oppenheimer in Sellars’s acclaimed production of Adams’s Doctor Atomic with the Netherlands Opera, a role that also served for her debuts at the Lyric Opera of Chicago, Finnish National Opera and Teatro de la Maestranza in Seville, Spain. She joined the roster of the Metropolitan Opera for its new production of Doctor Atomic under the direction of Alan Gilbert. Ms. Rivera has also performed Nixon Tapes with the Pittsburgh Symphony under John Adams’s direction, as well as his composition El Niño with the Boston Symphony Orchestra and Saint Louis Symphony Orchestra under David Robertson, San Francisco Symphony under John Adams, and at the Edinburgh International Festival with James Conlon and the BBC Scottish Symphony Orchestra.

Rivera made her critically acclaimed Santa Fe Opera debut in the summer of 2005 as Nuria in the world premiere of the revised edition of Osvaldo Golijov's Ainadamar. She reprised the role for the 2007 Grammy Award-winning Deutsche Grammophon recording of the work with the Atlanta Symphony Orchestra under Robert Spano, and bowed in the Peter Sellars staging at Lincoln Center and Opera Boston, as well as in performances at the Barbican Centre, the Adelaide Festival of Arts, Cincinnati Opera, and the Ojai, Ravinia, and New Zealand International Arts Festivals. Performances of Margarita Xirgu in Ainadamar took place in the summer of 2007 at the Colorado Music Festival under the baton of Michael Christie and she reprised the part recently for the Teatro Real in Madrid.

Committed to the art of recital, Rivera has appeared in concert halls in New York, Los Angeles, Chicago, San Francisco, Cincinnati, Oklahoma City, Las Vegas and Santa Fe. She was deeply honored to receive a commission from Carnegie Hall for the World Premiere of Nico Muhly’s song cycle entitled The Adulteress, for her Weill Hall recital performance.

As a recording artist, Rivera’s extensive discography includes releases on the Deutsche Grammophon, Nonesuch, Naxos, Telarc, Urtext, VIA Records, Opus Arte, CSO Resound, and ASO Media labels. Her third release for Urtext, an Homage to Victoria de los Angeles, is due for release in 2020.