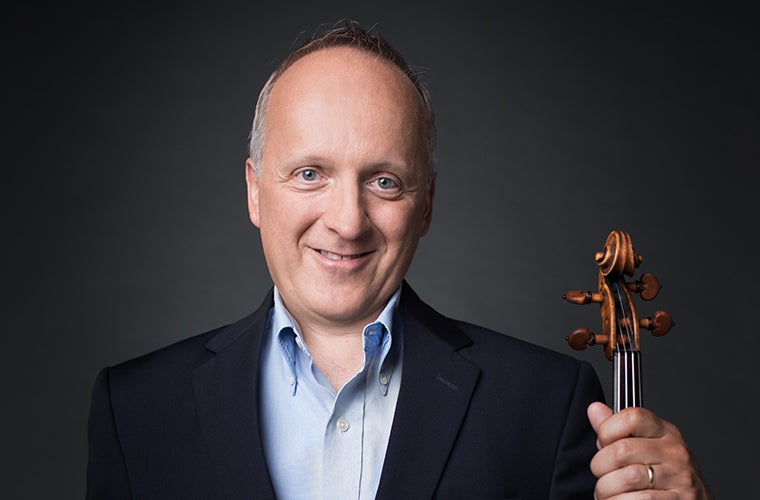 Jay Christy is the Acting Associate Principal/Assistant Principal Second Violin of the Atlanta Symphony Orchestra and has been a member of the Orchestra since 1992. An active violin teacher and coach in the metropolitan Atlanta area, Christy is an Artist Affiliate at Emory University, and has taught at Reinhardt, Georgia Tech and Covenant Colleges. As a chamber musician, Christy has performed with Robert McDuffie at Mercer University, Noah Bendix-Balgley, Jonathan Carney, David Halen, the Georgian Chamber Players at Spivey Hall, Riverside Chamber Players, Emory Chamber Music Society, Vega String Quartet and Thamyris. He has two chamber music recordings with the Riverside Chamber Players and the Christy Oboe Quartet, which is comprised of his two sisters and brother-in-law. Since the summer of 2003 he has played in the Grand Teton Music Festival in Jackson Hole, WY, where he was featured in a live broadcast for NPR's "Performance Today." In 2013, he was invited to join the faculty of the Brevard Music Center in North Carolina where he played Principal Second Violin. In 2012, Christy was invited to perform with the Cleveland Orchestra under Franz Welser-Möst and performed concerts in Cleveland, Carnegie Hall and Miami. He has also performed with the National Symphony, Pittsburgh Symphony and the Minnesota Orchestra. He was Assistant Concertmaster of the American Sinfonietta from 1999-2002 in Bellingham, WA, and has soloed with the National Repertory Orchestra under Otto Werner Mueller, the Cleveland Institute of Music Orchestra under Louis Lane, the Ohio Ballet Orchestra, and the Congress of Strings Orchestra in a double concerto with Joseph Silverstein. He has also appeared as soloist with the Emory Youth Symphony Orchestra, Walton High School Orchestra on an Austrian tour, the Rome Symphony, Florida Space Coast Philharmonic, Florida Symphony Orchestra under Alfred Savia, and the Melbourne Community Orchestra.

Christy began studying the violin at the age of three in the Washington, D.C., area with his mother, Nancy. His other teachers include John Merrill of the Baltimore Symphony and Lev Gurevich of the Florida Symphony. He received his Bachelor of Music degree from the Cleveland Institute of Music as a student of David Cerone, David Updegraff, Victor Danchenko, and Eugene Gratovich. He received his Master of Music degree from Indiana University as a student of Franco Gulli, and later pursued orchestral studies with Stephen Majeske and Bernhard Goldschmidt of the Cleveland Orchestra.

Christy is a deacon at Christ Presbyterian Church, and resides in Marietta, Georgia with his wife Katie and their five children, Diana, Jeanette, Andrew, Allen and James.

Cats or dogs?
Don't need them, I have 6 kids

Do you come from a musical family?
Yes, dad plays trumpet and conducts, mom teaches violin (she actually taught one of my colleagues- David Dillard, when he was a young child), sisters are both professional orchestral players

Earliest musical memory?
My violin teacher "eating" my violin when I was 3 (you crunch the bow on the back of the violin to make it sound like you are eating it)

What's your favorite Atlanta hidden treasure?
Kennesaw Mountain trail systems--really cool stuff if you get off the main trails