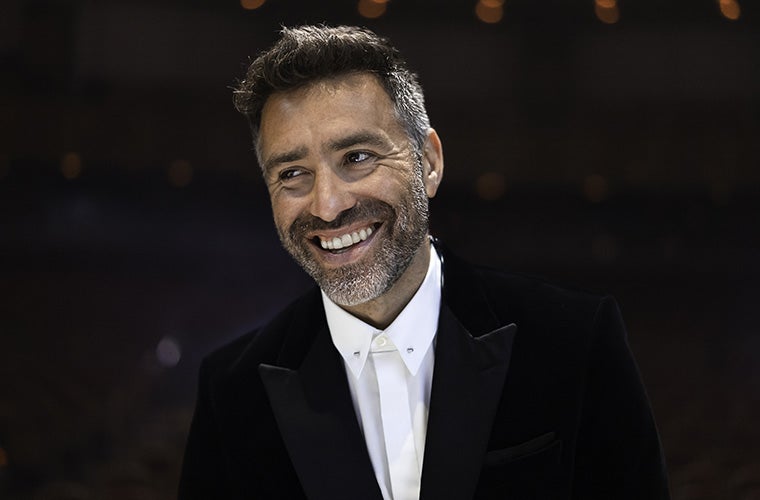 Portuguese-American conductor Jacomo Bairos continues to redefine what a conductor can be in the 21st century. He challenges the preconceptions of orchestral repertoire, blurs the lines of genres, and integrates the orchestra into the broader community in new, holistic, and organic ways. Bairos is the 17th Music Director for the Amarillo Symphony, Co-Founder and Artistic Director for Miami’s Nu Deco Ensemble, and performs regularly as a guest conductor with some of the world’s finest orchestras.

Bairos’ performances have been described as “thrilling" (Providence Journal), “inspirational and highly communicative” (Singapore Straits Times), and having a “splendid sense of musicality” (Knoxville Mercury). The New York Times hails Nu Deco Ensemble as “chamber orchestra for the 21st century,” while Billboard called them “a sonically spellbinding experience.”

In the 2019-2020 season, Bairos makes debuts with the Seattle Symphony, the Cincinnati Pops, returns to the Symphonies of San Francisco, Houston, Atlanta, and Sarasota, as well as releases his first studio album with Nu Deco Ensemble. Bairos also is in residency at the Peabody Institute for performances and lectures this fall, and makes his operatic debut with Britten's Turn of the Screw in collaboration with Illuminarts Miami. In June, Bairos made highly successful debuts with the Boston Pops, returned to the Atlanta Symphony and continued his relationship with the Sewanee Music Festival working with America's premier young musicians.

Along with composer Sam Hyken, Bairos is Co-Founder and Artistic Director for Nu Deco Ensemble- "Occasionally, you see or hear something that blows your mind. Last night, Nu Deco Ensemble at Saratoga Performing Arts Center was exactly that" (Saratoga Living). Since its inception in 2015, Nu Deco Ensemble has exploded onto Miami's eclectic musical scene by captivating audiences, holistically engaging with its community, and fusing innovative, genre-bending orchestral performances and collaborations with the highest levels of musical artistry. Nu Deco enters its fifth season with the release of their first studio album (whose first single has gained over 60k streams in less than a week) featuring living composers, popular artist re-imaginations, and unique collaborations with Kishi Bashi and Danay Suarez. Additionally, Nu Deco ensemble has joined the prestigious roster of Red Light Management in Los Angeles, renewed partnerships with the Adrienne Arsht Center for the Performing Arts, and returns to the Boca Festival of the Arts.