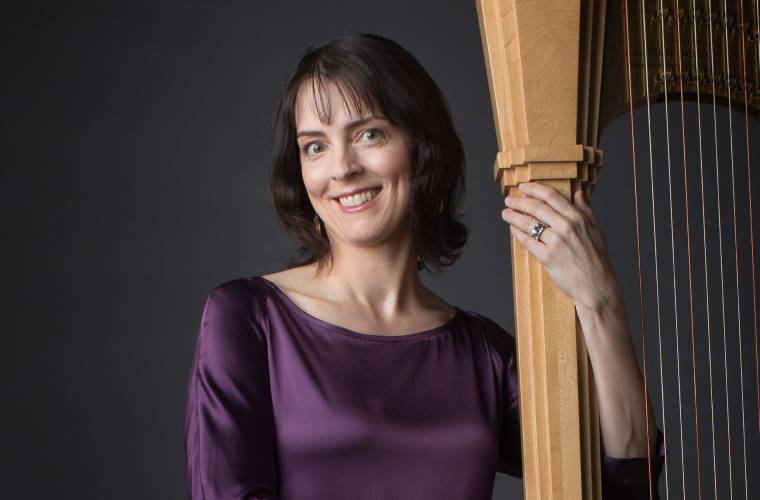 Elisabeth Remy Johnson was appointed principal harpist of the Atlanta Symphony Orchestra in 1995. She holds the endowed Carl and Sally Gable Chair, and also held the honorary UPS Community Service Chair for 2006-07. With the Atlanta Symphony, Elisabeth has performed concertos by Debussy, Handel, Mozart and Ginastera. Winner of first-place awards in competitions of the American Harp Society and the American String Teachers Association, she is also a NFAA/ARTS awardee. She graduated from Harvard University Phi Beta Kappa with a double major in Music and French. Her harp studies were with Ann Hobson Pilot in Boston and Alice Chalifoux at the Salzedo Summer Harp Colony in Camden, Maine. With the ASO, Elisabeth has been privileged to work with a diverse range of the world’s greatest artists, from Yo-Yo Ma to Stevie Wonder, Julie Andrews to Jessye Norman. She has also performed as Principal Harpist with the Boston, Houston, and Milwaukee Symphony Orchestras.

Elisabeth has performed on numerous recordings with the ASO, including a feature performance of Britten’s “Ceremony of Carols” with Robert Shaw and his Chamber Singers for the Telarc recording “A Robert Shaw Christmas: Angels on High”. Elisabeth’s first solo album “Whirlwind”, was released in fall 2000 (ACA Digital Recording). A flute and harp recording with ASO principal flutist Christina Smith, “Encantamiento”, was released in fall 2008. The American Record Guide writes: “This collection is aptly named, for we have enchantment here long before we reach the composition with that title, and the sound of Elisabeth Remy Johnson’s harp is captured with exceptional brilliance, her artistry a constant joy.” On another recording with the ASO’s former Principal English Horn, Pat McFarland, the Journal of the International Double Reed Society comments: “Here and throughout, her work on the harp is meticulous, full of variety, and gorgeously vibrant.” “A Christmas Collection”, for solo harp, was released in December 2015. A new solo album, “Quest” features works by women composers, and will be released in May 2021.

In addition to frequent solo and chamber music recitals in the Atlanta area, Elisabeth has performed with the Atlanta Chamber Players, the Carolina Chamber Music Festival, the Amelia Island Chamber Music Festival, the Emory Chamber Music Society, and is a frequent guest at the Meeting House Chamber Music Festival on Cape Cod, MA. Elisabeth has performed at the American Harp Society National Conventions numerous times, recently giving the world premiere of Son Risa by Robert Xavier Rodriguez in San Francisco and performing in a reunion quartet of the 1988 “The Tonight Show” performance at the Alice Chalifoux Tribute Concert in Detroit. Elisabeth was a featured performer at the International Harp Festival in Rio de Janeiro in 2010, 2016, 2017, and 2019, and was the featured artist of the 2012 Mid-Atlantic Harp Festival. Elisabeth also frequently collaborates with her ASO colleagues Danny Laufer and Christina Smith in Aster Trio. In 2018, Elisabeth founded The Merian Ensemble, a group of colleagues from the ASO dedicated to “Listen: Works by Women”, an annual concert series focusing on chamber music written by women. Excerpts from 2019 performances were featured on WABE’s “City Lights” and have been aired numerous times on NPR’s “Performance Today”.The Merian Ensemble’s Listen: Works by Women 2020/2021 programming is entitled “American Music For Today and Tomorrow” and spotlights first-generation and “new” Americans writing in distinct and vibrant voices. The group will feature this repertoire in March and May 2021 at several Atlanta performance venues, rescheduled from 2020 performances cancelled due to COVID 19. The Merian Ensemble was a 2020 recipient of the Mid Atlantic Arts Foundation USArtists International grant, to enable a tour to Rio de Janeiro, Brazil, currently rescheduled for May 2022.

Elisabeth teaches harp privately, through the ASO Talent Development Program, and at several universities in the Atlanta area. She coaches the harpists of the Atlanta Symphony Youth Orchestra, and is an artist affiliate at Emory University, Artist in Residence at Kennesaw State University, and Adjunct Instructor at Georgia State University. Elisabeth is co-founder of the Urban Youth Harp Ensemble, a program serving 55 students from 7 schools in the Atlanta Public School system, and was artistic director  from 2000 to 2010. For this work she received Atlanta’s Channel Eleven Community Service Award and the TBS Pathfinder’s Award. In fall of 2009, Elisabeth was awarded the Atlanta Business Chronicle’s “Up & Comers Award”, also known as “40 under 40”, showcasing young community leaders in Atlanta.

Why did you choose your instrument?
I saw a harp concert at a little church when I was 6 years old. The harpist let me come up to touch the harp after the concert, and it turned out she gave lessons locally. So my parents rented me a tiny little harp that was basically just wood and strings, and that was the beginning!

What's the most interesting or difficult facet of your instrument?
You have to be ready for anything - changing all seven pedals in two seconds to start wherever the conductor would like to start in rehearsal, fixing a broken string right before a concert, or even during the concert.

Any famous people in your family?
Apparently, I'm distantly related to Jerry Remy of the Red Sox.