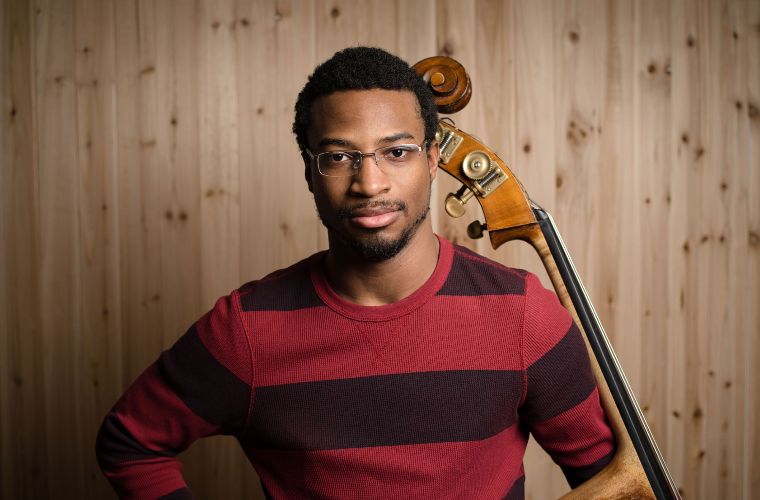 Xavier Dubois Foley is known for communicating his virtuosity and passion for music on the double bass, which is rarely presented as a solo instrument. Winner of a prestigious 2018 Avery Fisher Career Grant, he was recently recognized on New York WQXR’s "19 for 19" Artists to Watch list, and featured on PBS Thirteen’s NYC-ARTs.

Also a composer, Mr. Foley was co-commissioned by Carnegie Hall and the Sphinx Organization for a new work entitled “For Justice and Peace” for Violin, Bass, and String Orchestra, which was recently performed at venues including Carnegie Hall as part of a program designed to promote social justice.

In 2018, he made his acclaimed New York recital debut at Merkin Concert Hall and his Washington, DC debut at the Kennedy Center’s Terrace Theater on the Young Concert Artists Series. The program included two of his own compositions. He has also performed at Carnegie Hall as a Laureate of the Sphinx Competition, at the Young Concert Artists Series at Alice Tully Hall and the Morgan Library, and
for Boston’s Isabella Stewart Gardner Museum, Paramount Theatre in Vermont, Harriman-Jewell Series in Missouri, and Buffalo Chamber Music Society. This season, invitations for Mr. Foley to perform include Arizona Friends of Chamber Music, Alys Stevens Performing Arts Center, Shriver Hall Discovery Series,
Virtuosi Concert Series of Winnipeg, as well as the Zenith and Bridgehampton Chamber Music Festivals.

A native of Marietta, GA, Xavier Dubois Foley is an alumnus of the Perlman Music Program, and earned his Bachelor of Music from the Curtis Institute of Music working with Edgar Meyer and Hal Robinson. His double bass was crafted by Rumano Solano.