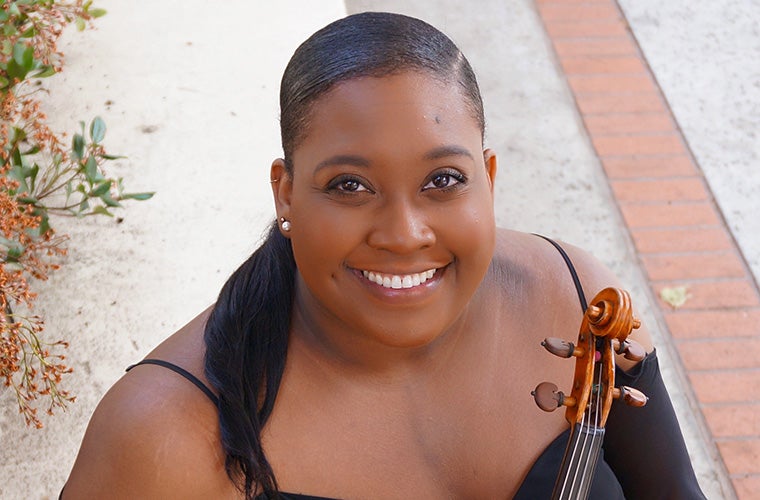 Home About the ASO Chelsea Sharpe

Georgia native Chelsea Sharpe is a violin fellow at the New World Symphony in Miami Beach, FL. She served as co-concertmaster on the orchestra's 2019 tour to Carnegie Hall and was also chosen to perform at the Kennedy Center Honors in DC in dedication to awardee, Michael Tilson Thomas, New World's founder and music director.

Ms. Sharpe is a graduate of the Atlanta Symphony's Talent Development Program and was the subject of a joint Atlanta Symphony Orchestra/Georgia Public Television (GPTV) documentary entitled Instrumental Success with her former teacher, ASO violinist Ronda Respess in 2004. She attended both Rice University and the University of Southern California, where she studied with Kathleen Winkler and Glenn Dicterow, respectively.

Ms. Sharpe has spent her summers at Sarasota Music Festival, Heifetz International Music Institute, Music Academy of the West, Kneisel Hall Chamber Music Festival, Le Domaine Forget (Quebec), and abroad in the Mediterranean as a violinist for Lincoln Center Stage. She has also played with the Grant Park Orchestra and serves as a substitute for the Atlanta Symphony.

Most recently, Ms. Sharpe toured the US with the Sphinx Virtuosi, one of the nation's most dynamic professional chamber orchestras, highlighting repertoire from underrepresented and new composers as well as serving as cultural ambassadors to communities all over the country. She has also recorded TV/film scores and provided strings for multiple popular artists.