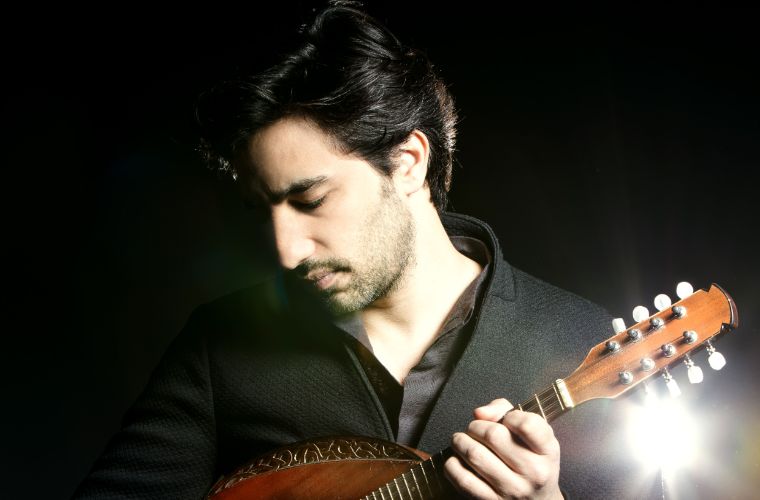 Home About the ASO Avi Avital

The first mandolin soloist to be nominated for a classical Grammy, Avi Avital has been compared to Andres Segovia for his championship of his instrument and to Jascha Heifitz for his incredible virtuosity. Passionate and “explosively charismatic” (New York Times) in live performance, he is a driving force behind the reinvigoration of the mandolin repertory. More than 100 contemporary compositions have been written for him, 15 of them concertos including by Anna Clyne, Avner Dorman and Giovanni Sollima which will be premiered in 2019/20.  Enhanced by his infectious spirit of adventure and the warm rapport he fosters with his audience, Avital’s championship of his instrument is taking the mandolin centre stage.

In 2019/20, Avital returns to Carnegie Hall, and makes his debut at Walt Disney Concert Hall as part of a North American tour with Les Violons du Roy, which also includes multiple stops in California and the East Coast. Highlights of that season in the US also include performances with the Baltimore and Vancouver Symphonies, as well as a two-week duo tour with harpist Bridget Kibbey. Recent appearances in the US also include his debut in Carnegie Hall’s Stern Auditorium with Orpheus Chamber Orchestra, and performances with the Chicago Symphony, Los Angeles Philharmonic, Montreal Symphony, Detroit Symphony, San Diego Symphony, Los Angeles Chamber Orchestra, St. Louis Symphony, and play-directing the Seattle Symphony.

Highlights of his season back in Europe include the world première of Giovanni Sollima’s Mandolin Concerto with the Orchestra Sinfonica Nazionale della RAI whilst other concerto engagements bring him to the Orchestra dell’Accademia Nazionale di Santa Cecilia, Orchestra della Svizzera Italiana, Zurich Tonhalle Orchester, abd the Staatskapelle Weimar. He will also return to the Berlin Philharmonie, the Frankfurt Alte Oper, and the Bozar in Brussels, where he is featured as Portrait Artist.

An exclusive Deutsche Grammophon artist, he has made four recordings for the label. Recently released Avital meets Avital (2017) with oud/bassist, Omer Avital, explores their shared cultural heritage and brings their differing classical and jazz musical backgrounds into dialogue. Earlier releases featured original concerti and transcriptions by Vivaldi (2015) his own Bach concerto transcriptions (2012) and Between Worlds (2014), a cross-generic chamber collection exploring the nexus between classical and traditional music.

He is a favorite on the international festival circuit having appeared at the Aspen, Salzburg, Tanglewood, Spoleto, Ravenna, Cheltenham and Verbier Festivals, amongst others, and he was Portrait Artist at the Schleswig-Holstein Music Festival in 2017 which involved over 20 performances of 10 different programs. Artistic partners in a variety of genres with whom he collaborates include Andreas Scholl, Juan Diego Flórez, Dawn Upshaw, Giora Feidman, Ray Chen, David Greilsammer, Richard Galliano, Ksenija Sidorova, percussionist Itamar Doari and the Dover and Danish String Quartets. He was featured artist in a Zeitsinsel at the Dortmund Konzerthaus where he curated a weekend of programs featuring classical, jazz and improvisations and a new collaboration with the Venice Baroque Orchestra and Georgian puppet theatre, Budrugana Gagra.

Born in Be’er Sheva in southern Israel, Avital began learning the mandolin at the age of eight and soon joined the flourishing mandolin youth orchestra founded and directed by his charismatic teacher, Russian-born violinist Simcha Nathanson. He later graduated from the Jerusalem Music Academy and the Conservatorio Cesare Pollini in Padua, Italy, where he studied original mandolin repertoire with Ugo Orlandi. Winner of Israel’s prestigious Aviv Competition in 2007, Avital is the first mandolinist in the history of the competition to be so honored. He plays on a mandolin made by Israeli luthier Arik Kerman.