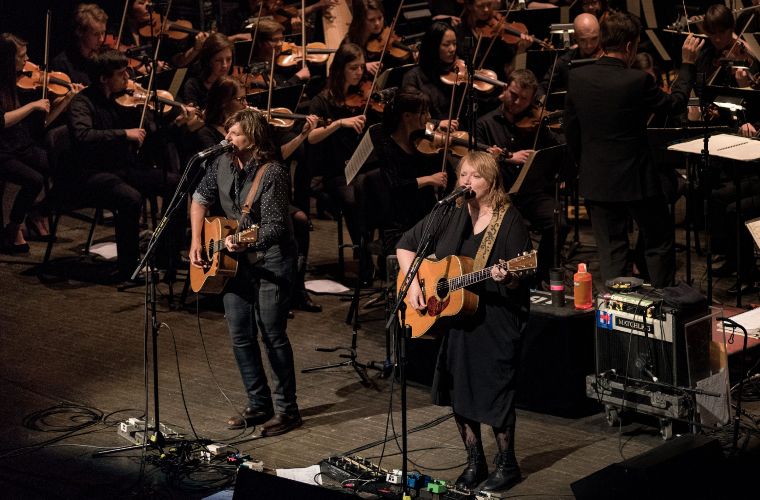 Our top priority is the safety of our patrons, artists, staff and our community. Due to the rapid rise in cases of COVID-19, we regretfully inform you that Indigo Girls with the Atlanta Symphony Orchestra on December 30 & 31, 2021 has been postponed to next year and will happen on December 30 & 31, 2022. This is not an easy decision to make, but in the current situation, we cannot move forward with these shows this year.

Patrons are encouraged to hold on to their tickets, as they will be honored at the newly announced dates. Please note that tickets for the originally scheduled dates will correspond to the same date in 2022 (i.e., New Year's Eve tickets will be good for New Year's Eve show in 2022). For additional ticketing options and refund requests, please visit aso.org.

Twenty years after they began releasing records as the Indigo Girls, Amy Ray and Emily Saliers have politely declined the opportunity to slow down with age. With a legacy of releases and countless U.S. and international tours behind them, the Indigo Girls have forged their own way in the music business. Selling over 14 million records, they are still going strong. Amy & Emily are the only duo with top 40 titles on the Billboard 200 in the '80s, '90s, '00s and '10s.

In 2012, Saliers and her Indigo Girls partner Amy Ray embarked on a bold new chapter, collaborating with a pair of orchestrators to prepare larger-than-life arrangements of their songs to perform with symphonies around the country. The duo found an elusive sonic sweet spot with the project, creating a seamless blend of folk, rock, pop, and classical that elevated their songs to new heights without scarifying any of the emotional intimacy and honesty that have defined their music for decades. Now, after more than 50 performances with symphonies across America, the experience has finally been captured in all its grandeur on the band’s stunning new album, ‘Indigo Girls Live With The University of Colorado Symphony Orchestra.’

The power of unity, both in music and in life, has been an Indigo Girls calling card ever since they burst into the spotlight with their 1989 self-titled breakout album. Since then, the band has racked up a slew of Gold and Platinum records, taken home a coveted GRAMMY Award, and earned the respect of high profile peers and collaborated from Michael Stipe to Joan Baez. NPR’s Mountain Stage called the group “one of the finest folk duos of all time” while Rolling Stone said “they personify what happens when two distinct sensibilities, voices, and worldviews come together to create something transcendentally its own.”

The duo has balanced their long, successful musical career by supporting numerous social causes – the Indigo Girls don’t just talk the talk; they walk the walk. Both on and off the stage, Emily Saliers and Amy Ray have secured their spot as one of the most legendary musical acts of this generation.